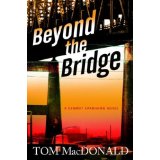 Dermot Sparhawk was working in the parish food pantry when a man approached him, asking for help in clearing his brother’s name. His brother was a recently murdered priest who had been accused of being a pedophile. Reluctantly, Dermot agreed to look into it. Then another priest and another was murdered and crucified in the same way. Battling alcoholism and a turf war with police, Dermot, along with his Micmac Indian cousins and a paraplegic former football teammate, chases clues to the serial killer, ultimately placing themselves in danger.

Tom MacDonald’s first novel, The Charlestown Connection won the 2012 Next Generation Indie Book Award, Best First Novel, and was a finalist for the American Librarian Association Book of the Year Award. After a long career in business, he now works in the non-profit sector as Director of Social Ministries at St. Mary-St. Catherine of Siena Parish.

Engrossing from page one, this novel brings to life fascinating people involved in a tantalizing mystery. Aside from rather tedious descriptions of travel routes, this intricate crime thriller is riveting and immensely enjoyable and the eventual identity of the suspected serial killer is a shocker.