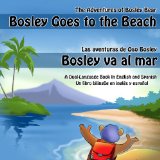 Bosley Bear wakes up one morning and looks out the window, la ventana. It is a beautiful day un dia hermoso. He packs up his toys, los juguetas, and heads to the beach, la playa, with his mama. As Bosley discovers all the wonderful new things around him, readers do too.  Bosley meets a fish, un pez, a bird, un pajaro and a crab, un cangrejo. He even has time to build a sand castle, un castillo de arena and other amazing sand creations. Join Bosley Bear on his fun adventures in Bosley Goes to the Beach, by Tim Johnson, author of a set of bilingual children’s books designed to teach young readers how to speak a new language.

Ozzy Esha’s illustrations are cheerful and bright. Each one is followed by a page of text that is split into two columns. On the left side is the English portion of the story and on the right side is the Spanish translation. Key vocabulary words are highlighted in green. Another set of illustrations features labeled items with both the Spanish and English vocabulary terms. For example, as Bosley packs his red bag full of toys, the table is covered with a kite, una cometa, a shovel, una pala, a bucket, un cubo and a towel, una toalla. Later, at the ocean, Bosley finds a seashell, una caracola and sees the clouds, los nubes. At the end of the book, the new vocabulary words are listed in the order of their appearance in both English and Spanish. Johnson uses word repetition, simple phrases, numbers, highlighted phrases and labeled illustrations to reinforce new concepts.

If you like the Spanish-English version of Bosley Goes to the Beach, check out www.thelanguagebear.com to find out more information about the series. Bosley Sees the World, Bosley’s First Words and Bosley Builds a Treehouse are all available in different languages.