Days of Blood & Starlight: Daughter of Smoke and Bone 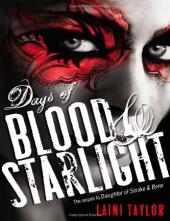 Movingly Mesmerizing and Better Even Than the First

Bloody, morbid and full of cruelty, Days of Blood and Starlight is not an emotionally light read. Karou’s feelings of betrayal fuel her hatred toward the seraphim and she begins a project that may destroy all living things. Akiva spends his days grieving his mistake and still hanging on to a thread of hope that not everything is lost. But the new developments in a war that was thought to be over will be difficult to reconcile with.

“Freaky chick, you say? You can’t imagine. I am priestess of a sandcastle
in a land of dust and starlight.”

The novel gives a bigger picture of the revolution that is brewing. The chapters alternate points of view to share the developments from Karou’s side, and also the internal struggle Akiva fights every day. There is also input from Zuzana on the situation. A definitive line is drawn between chimaera and angel, but something does give eventually. More potent, the author exploits the breeding disaster and grim atmosphere left over from the last book. Somehow, the story ends up being more poetic with vivid descriptions of Karou’s ash covered homeland. Fans will not be disappointed with this second book in the series, because it delivers something more than an epic love story.