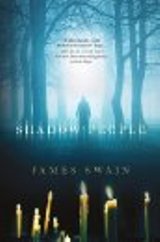 In James Swain’s Shadow People, things aren’t always as they seem. Magician Peter Warlock meets weekly with a group of fellow psychics to scry for crimes. They hope to tip off the police before anyone gets hurt. This time a group of shadow people toss Peter into the path of a serial killer about to nab his next victim. Peter and his friends must try to figure out the identity of this man in order to stop him before he commits another murder. With time running out (and much more going on than what initially seems apparent), Peter is in for a roller coaster of a ride.

Shadow People is a mystery dipped in the supernatural with a bit of magic thrown in for good measure. Readers may find this to be an entertaining read, but might also find the characterization to be a bit flat, lessening the impact of the story. While the talk of witches and psychics may be too weird for some, the larger conflict between good and evil will be a draw for others. Second in a series, this story is fast paced and makes for a good read.