Six of One: A Tudor Riff 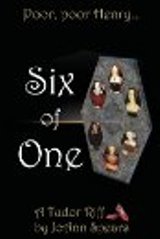 Six of One: A Tudor Riff by JoAnn Spears is a perfect read for a cold night, a glass of wine, and a comfy couch. Fast paced, humorous, and often written in rhyme, this quintessential chick-lit is worth the time. Dolly, the protagonist, is all set to marry her Harry. He is quite the catch, even with six ex-wives in tow. Believing herself to be the luckiest gal in the world, she gallops off into the night with her steadfast crew in tow for her bachelorette festivities before she walks down the aisle the next day. Unfortunately her night ends abruptly when she chokes on a bar nut, passes out, and awakes to find herself panty-less, clad in her night gown, in the coldest, dampest castle she has ever been in. Her curiosity is peeked by the ancient dress of her unknown hostesses. When a council of six women, all claiming to be one of Henry VIII’s wives, insist that she is about to make a serious marital blunder, Dolly doesn’t know how she will make it to the altar on time.

Spears creates a world in which old meets new. The reader gets to explore the lives of the infamous wives of Henry VIII. Each wife sets the record straight about her life and relationship with one of history’s most notorious kings. Spears masterfully weaves fact with fiction creating a tale too good to pass up. Consider it the best gossip in centuries.