The Inevitable Hour: A History of Caring for Dying Patients in America 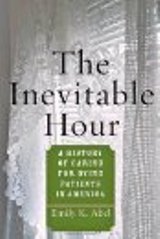 The Inevitable Hour: A History of Caring for Dying Patients in America by Emily K. Abel is a chronological look at hour the advent of the medical field has changed how we as society approach death between 1880 and 1965. Abel explains how America was initially a place where death was a social event. Neighbors gathered, friends, helped out, and the dying was called to make a good end, by preparing to meet their maker. But as the field of medicine grew, as it began to hold a monopoly on the knowledge of healing and the human body, those who were dying were often abandoned for those who were thought to be curable.

This book is well researched and meticulously constructed. Abel’s writing is enlivened with numerous anecdotes from diaries, journals, news papers, and patient charts, chronicling how everyone from the patient to the doctor, and the caretaker to the nurse approached death. While the last two sections of the book seem a little out of place, and the conclusion seems a little disjointed a strong argument could be made on the author’s behalf. How else could a book about the process of dying in America end, but with the advent of the Hospice movement?