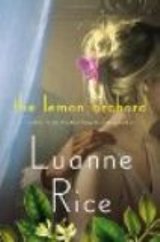 Luanne Rice has connected an unlikely pair in The Lemon Orchard. Julia lost her daughter and husband in a car accident five years ago and the ache still remains as she takes a trip to Malibu for the summer. Roberto works the lemon orchard where Julia is staying. Roberto, lost his daughter five years ago also as they were trying to cross into the United States illegally. He left Rosa by a rock and when he returned hours later she was no longer there. She was only six years old. Roberto is very conscious of the boss/worker relationship and keeps his distance from Julia as he works in the lemon orchard.  Slowly Julia and Roberto reveal their loss to each other and Julia begins to investigate where Rosa might have gone after being left at the rock. Julia quickly finds love with Roberto, even though the divide between rich and poor, White and Mexican paint a cloud over their acceptance from others.

Rice reveals answers slowly and surely. She often goes off on tangents as the characters revisit memories of their pasts. The story was predictable but still an entertaining read.