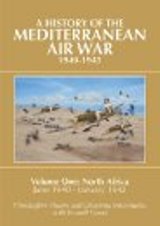 For us military history buffs, especially those that have an interest in air warfare, there is no better book available with the in-depth detail than A History of the Mediterranean Air War 1940 to 1942. This is the first volume by this author concentrating on the North African campaigns. The combatants during this period are mostly British, Italians and Germans. The amount of research the authors did is incredible. There are entries for every single day for the period that the book covers. For example, the first entry is dated Tuesday 11 June 1940 and gives the reader details about an air to air combat confrontation between British and Italian fighter squads. The British lost two planes along with their crews and the Italians had no casualties. The last entry is dated Saturday, 31 January 1942. Typically when there is a confrontation each squadron is required to turn in a damage report with as much detail as the pilots can remember. The authors meticulously researched all available combat reports from all combatants and compared notes looking for discrepancies. Information such as type of aircraft, how many planes were involved, kills or damaged planes can be difficult to verify from as single source. The pilots were more focused on trying to stay alive and kill their adversaries than taking accurate notes.

“Got into the middle of things, and onto a G.50 chasing him west down to ground level where he crash-landed after pumping tons of lead into him.” Neville Duke

The book is filled with pictures of the various aircraft, pilots and their crews and day to day life in the North African desert. This book reads like an encyclopedia on the subject and would be a valuable book to have in a library. Volume 2 when completed will cover 1 February 1942 to 31 March 1943.