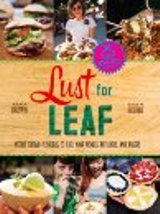 Lust for Leaf is an unusual vegetarian/vegan cookbook written by chef Alex Brown and food writer Evan George. This book is clearly written for the young partying type, mostly the single folks. Liquor is emphasized in recipes and comments and sexual innuendoes are regular. The recipes were converted from a professional kitchen and only partly successfully. They are not easy, in fact many are time-consuming in a home kitchen. Techniques such as deep frying are a snap in a commercial kitchen, not so at home. In many recipes grilling on a barbecue is one of the steps. Every recipe includes a suggested beer accompaniment (brands not easily available) and a music track. Tips in sidebars called Hey You! are only moderately useful. Most of the recipes are unusual and many have long list of ingredients. The ingredients are not listed according to conventional recipe writing, thus listing them according to use in cooking steps, they appear almost random. Many ingredients are hard to find: such as four different kinds of unusual exotic mushrooms, squash blossoms, Anton’s Bavarian Limburger, urfa biber, Acquerello Carnaroli. Color photo illustrations are nice but not professionally done. Index is brief, not cross referenced though adequate.