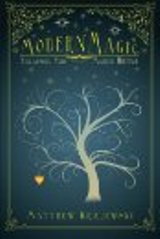 Matthew Krajewski has done just that with Modern Magic—Reclaiming Your Magical Heritage, an approach that uses common sense and common experience to convey evidence that humans are very much magical beings. Krajewski cites evidence that might just be supported by recent advances in the understanding and application of physics in general and quantum physics in particular.

Information can be arranged to travel on waves of energy. That is a reality that becomes obvious every time we hear a radio, watch TV, answer a cell phone, or send a text message. Modern Magic surmises that information rides waves of all sorts, generated by humans, animals, plants, even wind and earth movements. Information travels across the universe. The fundamental issue when discussing magic is how to perceive it without scientific instruments and then, how to interpret what is received. Modern Magic tells us that human beings are born with sophisticated equipment that receives this invisible information. We do it every day. Controversy begins when humans attempt to interpret what has been received. Consequently, intuition occupies a prominent place throughout the book and throughout the lives of magical people.

Modern Magic is full of anecdotes, practical methods to apply objective reasoning to subjective experience, and offers some history regarding magic across the millennia of human experience. Krajewski’s voice on the page is compelling, yet familiar, and he leads us along at a comfortable pace.

The overall impact of the book is not to demystify mysticism, but to let us know that we have tools to engage the mysteries of life and to interpret them in profound and meaningful ways.

PBR: What made you decide to write Modern Magic?
Krajewski: I underwent a major spiritual awakening in 2012, and along the way realized what I was experiencing was very unique, and should be recorded and expanded upon to help others. Part of my spiritual journey has been to learn how to listen to my intuition, and I can remember the exact moment when my intuition just lit up like a Christmas tree, confirming that this was the book I needed to write and share with others.

PBR: I’m sure the book was years in the making, from the first glimmer to the final manuscript, but how long did it take you to get through the first draft and into the final version?
Krajewski: The book came relatively quickly. Official work on it started in August 2012, pre-production and editing occurred in March 2013, and the book was published in August 2013. I studied writing at Sarah Lawrence, and have a fair number of unpublished novels I wrote on my bookshelf. I believe everything happens for a reason, and my former unpublished books were my “practice runs” before I was called to write Modern Magic.

PBR: What was the most daunting obstacle as you worked on the book?
Krajewski: The most daunting obstacle was self-doubt. In my experience, no one has really tried to write a book like this, wedding the scientific and mystical, plus I am young for a spiritual writer/teacher at just 31 years old. So many of the books that have informed my path are narrowly focused on one subject: shamanism, crystals, angels, meditation, and so on. Since my spiritual guardians were speaking directly with me, and I was engaged in such a plethora of spiritual practices, I began to wonder: “Hey, how is all of this connected? It has to be connected, and there has to be a relatively simple way to articulate that.” From this seed the beginnings of Modern Magic was born.

PBR: Has writing Modern Magic enhanced your energetic life?
Krajewski: Writing Modern Magic was really my initiation into a larger spiritual life. As I articulate in the book, spiritual work and learning is never really done. If you think you’re done, and you go through the motions of routine, then you’re hurting your spirit and energy. Since writing the book I am still exploring and writing, and my most recent foray is playing with Tibetan singing bowls to send positive prayers into the universe.

PBR: How has the book been received by colleagues not in your immediate circle?
Krajewski: People have been generally receptive. Some are cautious of my age, having preconceived notions that I must be a novice or shouldn’t be doing what I’m doing. But age is an illusion, and this isn’t my first incarnation. Generally, people are excited to see a young, spiritual teacher and writer. It is sorely needed in the world, especially for my generation that has been witnessing the slow collapse of the “old ways” in society our entire lives. Recently I met an older gentleman who told me he felt his prayers had been answered in meeting me, because he had been asking for years for the younger generation to awaken and help humanity and this planet.

PBR: Has the book started any new dialog with people who say they don’t believe in magic?
Krajewski: I have to say I expected to meet more skeptics, but at this stage I haven’t come across any. I find that most people have experienced something paranormal, mystical, or miraculous, and welcome the umbrella term “magic” to help them make sense of the experience.

PBR: When you first talk about the Green Man, you describe him as “…a defender of the forest, of life, of green energy itself.” What is he defending against?
Krajewski: The Green Man defends against disconnection from life. In California, I read a shocking article about the rise of biological xenophobia in the environmental community. For example, they will rip out old growth Eucalyptus trees because they are not native to California. This is abundantly ignorant, not only because it violates Mother Earth, and really pisses off the Green Man, but we are living in the era of honeybee hive collapse. And honeybees love Eucalyptus, not to mention the Monarch butterfly migration clusters around Eucalyptus trees on the California coast. In short, pollinators need Eucalyptus, and I believe biological xenophobia is just another outlet for people’s ignorance and hate. Anytime that the forest and trees are violated in the spirit of disconnection, the spirit of the Green Man will rise up in activists and sensitives to defend it. As the Lorax says, “I speak for the trees.”

PBR: Modern Magic is relentlessly positive, but are there ways for people to find trouble when attempting to get to the Other Side?
Krajewski: Oh yes, I believe people do struggle to reach the Other Side, but that is why I wrote the book. You don’t need to journey shamanically or have visions to really interact with the Other Side. Listening to your heart, being guided by your intuition, engaging in empathy; all of these are the blueprints for engaging with magic and indirect ways to engage the Other Side. Modern Magic gives people the toolbox to discover their own magic, but it is up to the reader to pick up the right tool and delve further into reclaiming their magical heritage. More than anything it takes intuition and trust, especially trusting that your guides and guardians that you can’t see, only feel, will guide you to your own magic.

PBR: Do you have any notions about another book?
Krajewski: I am currently finishing the second book, and recently started work on the third. The second book expands upon ideas in the first, and explores in detail the tactile experience of working with energy. The third book is a combination of spirituality and activism, providing a unique take on turning back the tide of honeybee hive collapse. I hope to publish both books in 2014.

PBR: Now what? Are you hitting the road, either physically or virtually, to sell the book and carry its message to more people?
Krajewski: I am definitely hitting the road. I recently went to Sedona and made great connections with the community there. Later this year I am traveling to New England to do the same. I am producing a video series connected to the book on my Magical Heritage YouTube channel, and I’m also very active on Instagram, GoodReads, and Twitter for the book. The Facebook channel for Modern Magic is close to reaching 1000 likes, and I love sharing with those interested in the book on that channel in particular. In mid-November, I will be unveiling a major redesign of my website, www.magicalheritage.com. I formed the company Magical Heritage Productions recently to be the umbrella organization for my future books and all my metaphysical work. A fun preview of the new site: there will be a “Are You A Magical Person Quiz?” that people will be able to take and get direction on how to explore their own potential magic. 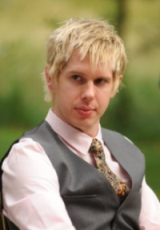 Matthew Krajewski attended Sarah Lawrence College where he studied writing. For the last eight years he has worked in Silicon Valley as a director of product management, but due to magical occurrences in his life, he increasingly turned his attention to writing and spirituality. Matthew is a modern mystic, incorporating diverse magical traditions and modern sensibilities into his spiritual practice. Modern Magic: Reclaiming Your Magical Heritage is his first work on spirituality. He lives in the woods of Aptos, CA with his partner and their dogs.