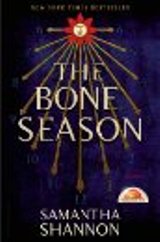 Samantha Shannon’s The Bone Season is an alternate history where clairvoyant abilities are a known commodity and people who exhibit them are feared and hunted. Paige Mahoney is a dreamwalker, a rare type of clairvoyant, and works in London’s underground for a powerful mime-lord for protection in exchange for her gift. However, Scion’s clairvoyant hunters are not so easily avoided. Captured on her way home one night, Paige wakes up to discover herself in the city of Oxford, believed destroyed two hundred years ago, but is actually now the home of a race of creatures called the Rephaim. Now a slave to creatures much more powerful, Paige must hone her abilities and learn who to trust if she is to survive.

The Bone Season builds a fascinating world, complete with clairvoyants, human trafficking, political turmoil, and monstrous creatures. This book is hard to put down, as unraveling the layers of deceit will keep readers up late at night. The main shortcoming to the story is that the characters are interesting, but poorly described, making it difficult at times to tell them apart. An exciting start to a series, The Bone Season will leave you waiting for more.