The Philosophy of History: Naturalism and Religion

“The historian asks the question ‘Why?'” 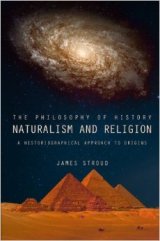 The Darwinian theory of organic evolution created a paradigm shift in the way human origin was viewed in historical context. It started a shift in the history of human thought, later expanding into other scientific disciplines, and culminating in the late 20th century as worldwide acceptance of physical chain, or cycle, of cause and effect with no room for the divine, the supernatural or the transcendental. This dominance of naturalism in the academic world is now giving rise to new questions and intellectual concerns which are the subject matter of James Stroud’s book The Philosophy of Religion: Naturalism and Religion.

A university graduate in Ancient and Classical History, Stroud presents a critical analysis and evaluation of naturalism as a philosophy of history in the contemporary academic world, especially in the more secular, developed west where it dominates the spirit of education to an imposing level. Admitting that there are no objective truths in history, he challenges naturalism and argues about its lack of scientific and logical validity.

Stroud’s case, based on his arguments presented in the book, appears pretty strong. His call for an “open philosophy” of the history of the universe and life on earth parallels his concern over the dictatorial policies recently adopted in some academic institutions in the U.S. and abroad whereby naturalism has been made a law and challenging or questioning it has become a punishable act. The main weak spot in Stroud’s work is perhaps his identity as a Christian theist. His arguments in favor of the history of Jesus and the bible seem more conveniently evaluated in comparison to naturalistic views.

The Philosophy of Religion: Naturalism and Religion opens up an important discussion on the democratic nature of science currently taught in much of the developed west. There is a lot of valuable historical information included, particularly the ancient history of Asia and the Middle East. The basic, easy-to-understand concepts of science and philosophy that Stroud uses in his argument make it a good read for any avid reader interested in fruitful discussion of issues relating to science, history, philosophy and truth. With over two hundred references and a mini glossary, it is especially recommended for scholars and students interested in the philosophy of science, history and theistic philosophy.