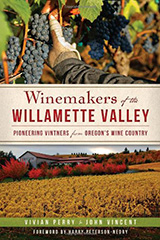 Oregon is currently the third largest wine producer in the United States behind California and Washington – which is no small task when you consider that the first wines in the post-prohibition era were produced in 1970. When David and Dianna Lett brought their Eyrie Pinot noir to the World Wine Olympics, the Gault-Millau French Wine Olympiad in 1979, their third place win and subsequent second place win in the following year, would set the precedent for an industry that would very quickly grow to be one of the most admired in the world.

“They were never going to build a Gallo, but they realized if they focused on learning, sharing [and] building community collectively, these small winemakers were going to make it.”

Whether you’re an avid lover of Willamette Valley Pinot noir or an interested consumer who has dabbled in the region’s cool-climate vintages, Winemakers of the Willamette Valley: Pioneering Vinters from Oregon’s Wine Country cannot help but inspire a deeper appreciation for the spirit of a community that in just 43 years has given birth to more than 300 wineries and 610 vineyards.

Broken up into personal interviews with winemakers from some the region’s most acclaimed wineries, Winemakers of the Willamette Valley is a journey into the soul of Oregon’s wine country and culture, narrated by the voices of the dreamers, rebels, scientists, and second-generation winemakers who have dedicated their lives to making some of the world’s best wine. The book does not set out to examine process and procedure, focusing instead, on the very human elements – most prominently, passion and community – that makes winemaking as much an art, as it is a science. Conversational, and frequently and surprisingly touching, Winemakers of the Willamette Valley is perfect for any wine lover looking to learn more about the birthplace of their favorite Pinot, and should be a mandatory requirement for any first-time visitor to Oregon’s wine country.