In Meat We Trust: An Unexpected History of Carnivore America 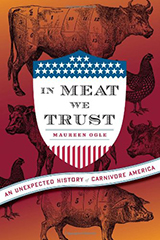 Maureen Ogle’s book, In Meat We Trust: An Unexpected History of Carnivore America, is a fantastic voice in the agriculture and food debate that continues in America. She doesn’t side with the industrial model or the Michael Pollen model, but instead states the historical circumstances and social workings that led to how we view meat in America. In her view, we need to understand the roots, even if they aren’t pretty, before we can comprehend the state of current affairs.

“Can we have the best of both worlds: a majority urban population and small-scale agriculture too?”

While ostensibly this is a book about meat, it goes deeper than that. Meat in America is a symbol for American society itself and our treatment of meat – wasteful, industrial, and removed from view – embodies the type of society we endorse. Ogle argues that Big Ag, in ensuring we won’t starve, has given us intellectual capital. We don’t have to spend all our time procuring nourishment, unlike our ancestors, giving us a surplus of time. Ogle’s final words ask that Americans use that intellectual capital to decide what type of society we want, over what kind of agriculture we want. Do we want to remain entitled and wasteful? Putting more in as inputs than we get back in product? There’s agriculture for that. Or do we want to reinvent who we are as a society and no longer take so much for granted? That, more than arguing about the agricultural model, will lead to a change in the American way of meat.