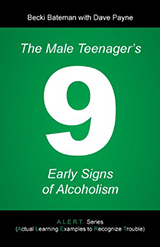 Early Signs, a Disappointing Look at a Difficult Topic

Becki Bateman’s The Male Teenager’s 9 Early Signs of Alcoholism is an “almost” book: “almost” new, “almost” engaging, “almost” important enough to recommend…but not quite. While the topic is important, Bateman locks herself to the number nine in her teen alcoholism series, and it’s difficult to discern why: nine early signs of teen alcoholism, nine middle signs, and nine late signs. More often than not, such a number lock forces a writer to either limit down to the number or inflate up to meet the number. In this case, Bateman does both. Her nine signs do not present themselves as evenly weighted or remarkably important. And while the book’s simplicity is appealing, the use of “J.D.,” a fictional 13-year-old presented as “a typical teenager” and used to illustrate each of Bateman’s signs of alcoholism, rings false.

“No one wakes up in the chronic stage of alcoholism; each and every drinker has had to go through the early and middle stages first.”

Bateman’s book undoubtedly would be more engaging and believable if the stories she chose were real and varied. The photos, too, seem canned and sometimes unrelated; illustrations should always augment the information presented, not repeat or distract.