Wordcatcher: An Odyssey into the World of Weird and Wonderful Words 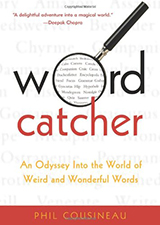 At first, Word Catcher: An Odyssey Into the World of Weird and Wonderful Words by Phil Cousineau seems like a bibliophile’s delight, a lexicon of approximately 250 words, ranging from abracadabra to zombification. Each word has a brief definition followed by a random rather than thorough extrapolation consisting of a short history, etymology, companion words, personal insights, a few illustrations, trivia, etymology, jokes and often loosely related pop culture references.

“Together, we find that to derive a word is to explore it, track it back to its earliest reference, story, or citation, the place from which it flows, a place full of immense energy, history, and mystery.”

These are all crammed together without any transitions or poetry, and can become disorienting. In one sentence, he’s using the lion from The Wizard of Oz as an example of a coward and in the next there’s a direct quote from Jack London from an unnamed source. In addition, there are outright errors. As an example of an amazon, he uses “Buffy the Vampire Killer” rather than “Slayer.” He borrows a literary quote from Charlotte Brontë’s Jane Eyre with the word bathos, but not only does he lift it from the middle of a sentence but he also creates new punctuation. Without attention to detail, any information found in such a book becomes unreliable.