Barbecue Crossroads: Notes and Recipes from a Southern Odyssey by Robb Walsh and O. Rufus Lovett 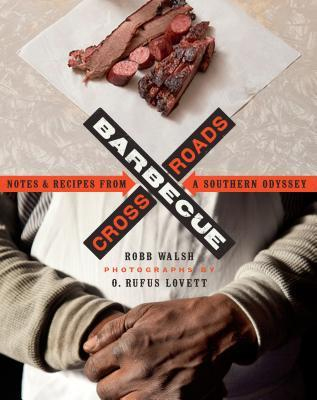 When Robb Walsh, an excellent food writer and restaurant critic teams up with O. Rufus Lovett, an equally great photographer to take off on a road trip to trace the lineage of authentic, old-fashioned barbecues, you can expect a great travelogue. Barbecue Crossroads admirably meets and exceeds expectations. The central focus is, of course, the barbecue joints of the southern United States, but just as important are the people they came across and their stories. Most of these restaurants are simple, no-frill establishments (some even refused the authors for interviews or photography), yet their food preparations are traditional and the results are exceptional. The foods they serve are not for those on a diet—they are rich, often fried, and the servings are enormous (e.g. a two-and-half-pound T-bone and a four-pound banana split!).

Following every chapter the authors present recipes typical of the joints whose foods they sampled. These are distinctive Southern recipes; barbecues and side dishes such as pork sandwiches, cornbread fritters, Brunswick stew and sweet potato pie, but they also include authentic sauces, relishes and other accompaniments. The photo illustrations are great, and feature half-page to double-spread photos. The sidebars include information on accessories like barbecue pans and rubs, and the book includes two indexes: recipes and food preparation and a general index.