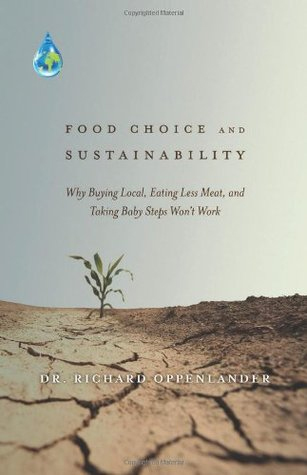 As a reviewer, I am puzzled who author Richard Oppenlander’s sees as his target readers for his book Food Choice and Sustainability. This is a scientific book but scientists would not be interested in the subject matter – they already know it. The public is also unlikely readers. Anyone with intelligence who can read the media, watch television and listen to radio have read, heard or listened to the topic at great lengths during the last two or three decades. Nevertheless, Oppenlander did a remarkably thorough job of researching the voluminous literature on the subject that appeared over the span of some thirty years.

“…[this] is a book about sustainability—of our planet, our resources, and ourselves.”

The twenty-seven-page list of references in the chapter-by-chapter endnotes proves that. This is a massive book of over four hundred pages of pure text, and with a very critical eye the author dissects every aspect of sustainability in food and food production. The text is filled with statistics proving or disproving ideas. For example, we all know about the “atrocities of the factory farms,” confined animals and slaughtering practices. Also of agribusiness and their negative impact. And so on. But the author is thirty years too late and suggests nothing new on the subject.