She Effin’ Hates Me: A Love Story by Scarlett Savage 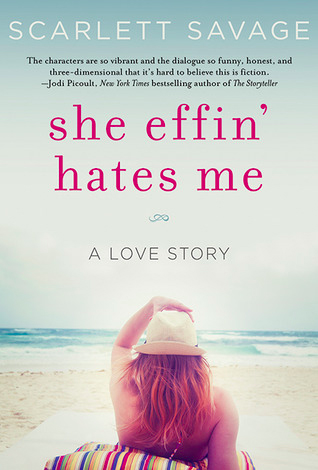 Scarlett Savage’s new book, She Effin’ Hates Me is more than just your average ‘chick lit.’ In it, we meet three generations of Applebaum women spending a long weekend together in which many secrets and surprises are revealed. First, there is Ava – a recovering alcoholic who blames a former flame for the fall of the family pub, the reason she went to the bottle in the first place. Then, we meet Suzanne – a single mom dealing with major life changes and trying to get used to a new vocabulary, who doesn’t want to be a grandmother at 36. And finally we have, Molly – a freshman at Vassar with a huge secret that will reshape her relationship with her mother. Suzanne is a good parent who tries to give Molly a strong foundation, but starts to question her parenting skills when Molly’s secret is revealed.

As the weekend progresses, each woman’s story unfolds to reveal many layers. Each woman brings her own history to the table, one that makes the weekend more than any of the Applebaum woman expected. We not only meet these three women, but also the men who help them rediscover their love for each other. Friends who were judged prematurely are given a second chance, and realize that they aren’t too different from the Applebaum women. Sometimes, we could all use a second look.

I would definitely recommend this book, especially if you’re looking for some highbrow chick lit and want something of substance that won’t waste your time.