The Cartographer of No Man’s Land: A Novel by P.S. Duffy 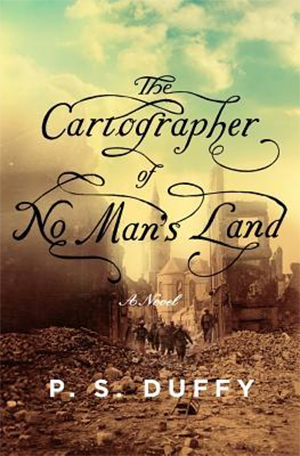 P.S. Duffy’s debut novel The Cartographer of No Man’s Land focuses on World War I and a small town in Nova Scotia. Angus joins the war effort not because of a strong sense of patriotism, but instead, to find his brother-in-law, Ebbin. Angus believes that because he is a cartographer, he will be safe and sound in London, but quickly finds himself on the front lines with all the desperation, despair and death. He leaves behind a distant wife, who pines for Ebbin, and a teenage son, Simon Peter. The chapters go back and forth from the front lines to life in Snug Harbor, Nova Scotia. While Angus fights his battles on the front, sees way too much death and deals with his own disasters, small town Canadian life has its challenges, too. Survival comes in many forms.

Duffy writes with great realistic detail and the reader will feel they are present in the trenches of the war. This reviewer enjoyed the Canadian perspective and this book was clearly well researched. The elements portrayed during injuries and deaths of the soldiers were so accurate, this reviewer found herself squeamish at times. The overall message of survival, hope and trying to find what is important resonated with this reviewer.