Dreams of Gods & Monsters (Daughter of Smoke and Bone) 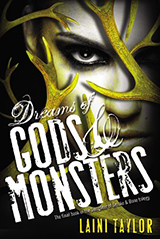 Fantastic End to a Popular YA Series

The final installment in the Daughter of Smoke and Bone trilogy, Dreams of Gods and Monsters ends the series on a high note. Karou and Akiva risk an alliance between the Misbegotten seraphim and the surviving chimera in order to drive the new emperor Jael from Earth before he can bring modernized weapons through the portal between worlds. However, their combined numbers fall under four hundred, and Jael’s private bodyguards total one thousand, leaving them horribly outmatched. Karou and Akiva must use their wits to survive and bring peace between their warring races – but peace between races that slaughtered each other for generations may be too difficult to achieve.

“Akiva recoiled. For no visible reason, he flinched as if struck. So, too, Liraz and the brother beside her, and though Karou wasn’t looking directly at the greater throng of Misbegotten, she saw the wave of movement sweep over them, too. The fluttering inside her died. And she knew that this alliance had been doomed the day Brimstone dreamt up the marks.”

As in the previous two books in the series, Laini Taylor does a fantastic job bringing her world and characters to life. The book begins right where the last one left off, throwing readers immediately into the action. If it’s been awhile since you’ve read the first two books, a reread might be in order! The book also introduces several new characters and finally gets to answer some very old questions. A fantastic YA book for fantasy fans, Dreams of Gods & Monsters is a solid end to an emotional roller coaster of a series.