The Lens and the Looker: Book I of the Verona Trilogy 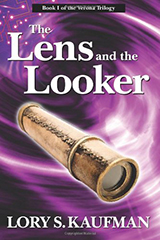 By the 24th century, the perfect society has been achieved. There is no war, nor hunger, nor injury that cannot be fixed by technology. Population growth has remained at a sustainable one million people. In order to keep this perfection, society lives by one mantra: “relive the past so that past mistakes may not be repeated.” Youths are sent to reenactment camps filled with society elders, to experience life as it was lead by their ancestors. The more rebellious children are given carefully planned hardships meant to help them appreciate the current status quo. Three youths have already received the harshest punishment doled out by their government: a month long internment at camp set up as 14th century Italy. Soon after the teenagers sabotage camp, they vanish. Somehow they end up in real life 14th century Verona Italy, and they have brought with them smuggled technology from the future. Can they survive in the household of a poor sodden lens maker without altering the course of history?

The plot of The Lens and the Looker centers on the development of the telescope in 14th Century Verona. Learning about the history of the development of the telescope, while interesting, would not hold a reader’s interest for long without some other stimulus. Sadly, the magical element of time travel went unquestioned by the characters that were far too accepting of their situation for “rebels.” Though obviously well researched, the narration lacked tension. Much descriptive time was spent on developing a shop and a technique for shaping the lens and then constructing the looker. What little excitement was contained in these pages centered on different powerful government entities vying for ownership of the new Technology. There was also a brief unimaginative love story between a couple of characters ironically named Romero and Guillietta, neither of which ended up having suicidal tendencies.