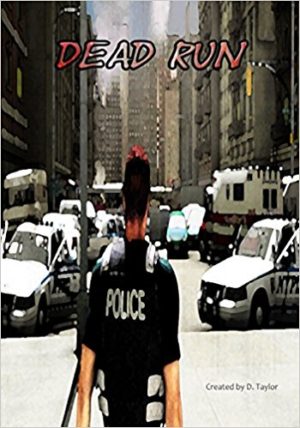 D. Taylor, creator of the graphic novel Dead Run, is an artist who uses pictures and words to tell a horrifying and gripping tale about a bio-terrorist attack that ravages a city and all who dwell within it. Taylor’s story follows three people as they experience the attack. Roger Simmons is a New York City cop who has been back on the job only two months after losing his old partner. Fran is a twenty-something waitress who can’t seem to find a decent guy. And Peter Green is a shady troublemaker who readers first meet in court when he is accused of assaulting an officer. This motley crew must work together to stay alive.

Through the use of television coverage, radio reports and police briefings, Taylor lets readers know that dirty bombs have exploded all over the city (not to mention in places as far away as China and Dubai). Anyone in contact with the released virus becomes a maniac killer. Roger, Fran and Peter have to make it through New York while dodging infected killers in order to get to the designated safe zone at the Brooklyn College campus. Along the way they see friends who have become infected, a mother and father attacked by their virus-ridden little boy and officers firing on the uninfected (“friendlies”). Will this ragtag group get to safety in time?

Dead Run has a lot going for it. This is a time when post-apocalyptic stories are successful on television, in comics and as the central theme for many books. Fans of The Walking Dead will surely enjoy Dead Run. Taylor’s characters are believable and likable. They have a chance to talk to each other as they are hiding from various threats and what they reveal makes them more multi-dimensional. Readers will be rooting for these three to survive. Vulgarities are used throughout their conversations but should not offend readers because the heightened threat level of the situation makes swearing more appropriate. These people are running for their lives! The infected don’t say more than an occasional “AAARRRRR” or “GAAARRR,” but that is to be expected. How much more sophisticated can zombie conversations be?

Taylor uses digital art to illustrate the book and the pictures are not in color. One drawback this poses is that some of the blacks, whites and grays blend together or lay flat on top of each other. This makes a few images hard to see and takes away some of their depth. For example, it is tough to distinguish Peter from other officers when their backs are facing the reader. Hair and clothing coloring aren’t there to provide clues. In another frame it is difficult to tell if a character is holding a gun because the black blends into the already dark background.

While this may bother some readers, Taylor’s choices do show the gritty reality of the situation. The world has become void of happiness and is quite stark in the aftermath of the bio-terrorist attack. Every virus-infected killer zombie starts to look the same, so exact detail isn’t always necessary. Also, with regard to Taylor’s decision not to use color, many of the scenes are very bloody and filled with dead killers. Using black and white takes a bit of the horror out and lets readers imagine it instead.

All this being said, it is a great graphic novel appropriate for an adult audience. Taylor manages to include a little humor (look for the reappearing infected clown) even though the topic is far from humorous. And Taylor makes it pretty clear that there will be sequel because the survivors’ run is far from over.