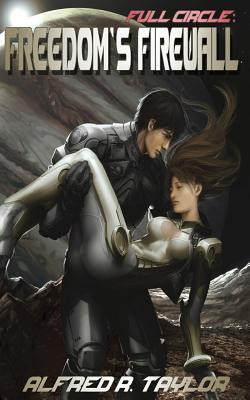 Alfred R. Taylor’s Full Circle series consists of exciting works of skillfully composed science fiction. Even for readers like your intrepid reviewer, who does not consider herself a fan of the genre, Taylor’s novels are intriguing, well-written, exciting and compelling. Full Circle: Freedom’s Firewall is no different.

The novel takes place in a distant future where androids walk the earth along with humans, serving more or less as slaves. Different levels of androids engage in different types of servitude, from police work to fulfilling the basest of human needs. With their perfect bodies and high levels of intelligence, androids are everything humans can no longer be—but can easily be reprogrammed, their minds erased, their memories decimated. Except there is a program that can crack the code, providing androids with the ability to get a glimpse of their past and freeing them from the human-imposed ignorance from which so many suffer.

Marshal John-27 is an Omega Class android, brilliant and perfect for law enforcement. When he discovers government corruption on Amalthea, an earth-like planet that is not very earth-like at all (and yet is), he inadvertently contributes to the uprising of an android rebellion. But the forces that be will stop at almost nothing to keep Amalthea under their control. John-27 (and the other androids) are against a ruthless opponent, one that wants the androids to stay in the place humanity has carved out for them.

While the story portrayed in Freedom’s Firewall is not unique, it is so powerfully and skillfully written that originality, arguably an over-emphasized quality in the first place, is rendered unimportant. One of Taylor’s greatest strengths as an author is that each character has depth, even the simplest of android classes. He does not sell his characters short. They do not exist solely to further the story but serve that purpose while remaining compelling and interesting as individuals. Perhaps there is a wealth of independently published science fiction writing in the world, but so far, Taylor is one of the only authors whose work has spoken to me, and that is saying something. The entire Full Circle series promises to be just as exciting and well done as this novel. Hopefully that will be enough to get the author some well-deserved recognition.