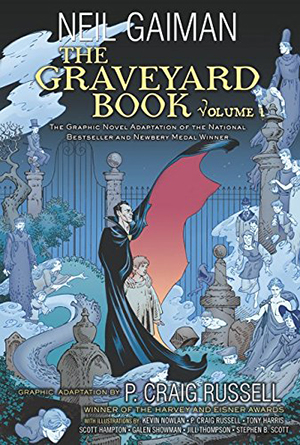 The Graveyard Book Graphic Novel: Volume 1 is the graphic novel adaptation of the first half of Neil Gaiman’s children’s fantasy novel of the same name. The book follows the character Nobody (or Bod) Owens, a child who escapes death at the hands of that man Jack, by wandering into a graveyard in the middle of the night. Granted the freedom of the graveyard, Bod is raised by his guardian—the vampire Silas—and the ghostly residents of the graveyard. The freedom of the graveyard grants Bod a certain level of protection, for as long as he remains inside its gates that man Jack cannot find him. However, what child can resist the allure of the forbidden?

This is a gorgeous graphic novel adaptation of The Graveyard Book and is completely accessible for both fans of the novel and readers new to the story. Despite its darker themes, this graphic novel is a children’s book focused on key lessons of friendship, consequences and discovery. Each chapter is illustrated by a different artist, and yet they manage to blend into each other seamlessly. A visual delight, The Graveyard Book Graphic Novel: Volume 1 is a graphic novel that is perfect for adults and children alike.