Alexandria’s Legacy: Sins of the Breeder by K. R. McDane 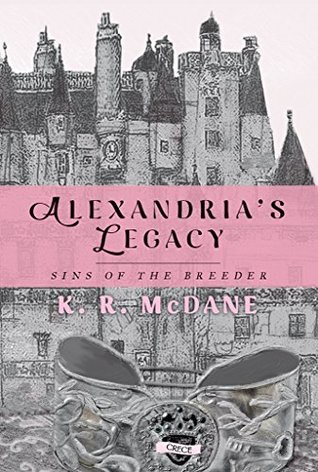 Royalty typically conjures an image with a hierarchy of the King and Queen, but the King holds all the power. What if there were no men left to rule? And no men created to rule? If selective breeding allowed that only girls were born to royalty, allowing the only people of power to be women, and a society that had women as the household decision maker, how would that change the thinking of the people in it? Of course, that would mean that men were needed only for procreation and labor work, which would in turn create sex for fun from the female perspective, because men would be passed around until they were no longer useful or interesting. These male prostitutes are called Breeders, and are the best opportunity for men to find work in. In Alexandria’s Legacy: Sins of the Breeder this is the society that now exists after the Kings and Princes are slain in a petty war.

The Queens of multiple kingdoms establish a treaty and put an end to the massacres to create a new way of life. While the drama expected to surround royalty continues to exist, a new element of power is intriguing and well played out in this story. When the pressure, drama and heartache become too much for the current Queen Alexandria, her sister Anastasia is eager to create chaos, underhanded scheming and claim any amount of power she can.

The wild card is that love occasionally happens, and fate sometimes outwits science creating a rare prince to the Queen, who surely cannot give up her child of the man she loves so much. Suddenly Princess Arathia doesn’t agree and revolts from the sexist, highly negative angle of feminism taken to an extreme, where equality no longer exists in the reverse, causing her to seek the help of Princess Thalia, from a neighboring land, who has been best friend to Alexandria. The end leaves with so many questions and the epilogue teases of how it will continue in the next installment of this trilogy from K. R. McDane. This author’s enjoyable book for a promising new series will have you preordering the next book long before it’s published!