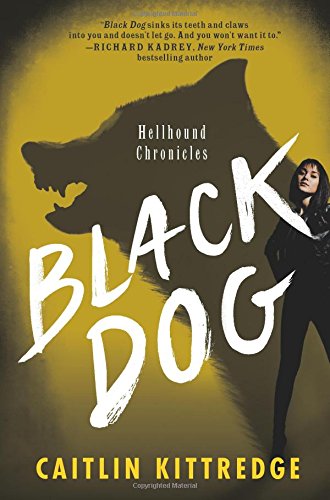 Ava is the hellhound of a reaper. Bound to – literally – be his dog, she must go where he tells her and reap souls whose contracts are up. Ava’s most recent directive is to terminate a local necromancer whose business is getting in the way of the reaper’s. The necromancer has other ideas and convinces Ava to kill her reaper and release herself from her servitude. Ava agrees but in doing so makes herself a target for Lilith – a fierce and cruel demon. Ava must track down the last soul on her reaper’s list in order to survive (or at least have a less painful death). When the contract goes wrong, Ava must choose whether she will keep running or stand and fight for herself for the first time in her (after) life.

Black Dog is the first book in the Hellhound Chronicles by author Caitlin Kittredge. Fans of the author may know her from her recent young adult series The Iron Codex. Black Dog is a dramatic change in tone and subject matter that fans should welcome. The book deals with dark magic (raising the dead, demon contracts), and a darker story for the heroine. Ava’s life before she became a hellhound was unpleasant and the book tackles subjects of domestic violence, sexual assault and deep-seated misogyny. There are lighter moments throughout the book, particularly in banter between Ava and her companions. The action scenes are well-written and descriptive but it’s Ava’s personal journey from abused errand girl (or hound) to a woman who is starting to come into her own and realize her own power. The first book was a solid start in the Hellhound Chronicles and it will be exciting to see what happens to Ava in her next adventure.