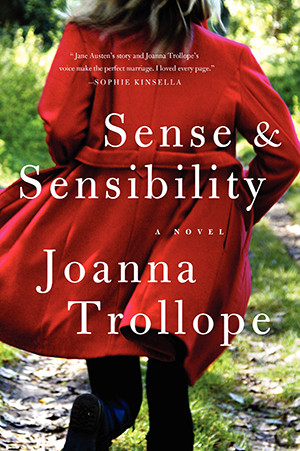 Sense and Sensibility by Joanna Trollope is a modernized story of Jane Austen’s classic novel with the same name, and most readers will be familiar with the tale. It’s a perennial story about two sisters moving in different directions towards love; Elinor who is sensible and unwavering and often considered the rock of a family comprised of otherwise ‘flighty’ women and Marianne, who devotes herself completely to her own pleasures and feels everything without reservation. They each come in contact with men whom they believe they love, but are inevitably exposed to the pitfalls of society, expectation and (unfortunately), disappointment.

Austen’s tales are often hard to modernize, though they retain their importance through the years – certain elements of the story fall short within our time frame. Oftentimes, the result leaves a feeling that something is ‘lost in translation’. Trollope’s attempt at it is admirable, she is true to the story as far as she can be and the same cast of characters endures in her retelling (none of this picking and choosing which characters to leave behind and which to include). Many of her updated characters have more inclusive back-stories than the original story and seem livelier than Austen’s originals – though some of the favorites from the original novel fall a little flat. Certain themes like ‘losing our home due to a death’ seem a little far-fetched, simply because it seems unlikely that three women who are of age would be without any jobs or any ability to gain employment, as well as Edward Ferrars being completely without a job even if he does have a good deal of money. All in all, the story retains its ability to study a cast of characters with a satirical point of view and though readers might be disappointed with the update, it’s certainly worth the read for die-hard Austen fans.