American Grotesque: The Life and Art of William Mortensen edited by Larry Lytle and Michael Moynihan 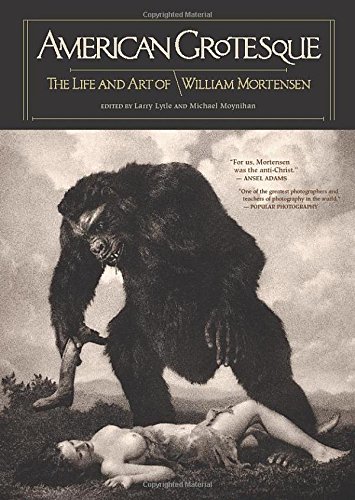 This comprehensive volume of William Mortensen’s work, American Grotesque, will likely take its deserved place as the authoritative volume on the topic. Mortensen, a giant of American photography in the early 20th century, has largely been forgotten by the general public in favor of more approachable photographers like Mortensen’s archrival Ansel Adams. Mortensen, however, remains an important figure in shaping modern photography, especially in his work changing and distorting the photographic image.

In addition to his photographic work, Mortensen is a relentless self-mythologizer, so Larry Lytle’s biographical essay, based on the true facts of Mortensen’s life, will be of interest to anyone with an interest in his work. This book is first and foremost a catalog, so there are a large number of reproduced images. This is a first rate catalog, and a definite must for any collectors interested in Mortensen’s work. Hopefully, this work will also bring Mortensen’s work to more people so it can move out of the shadows of Ansel Adams. This catalog does contain nudity and work that was designed to push boundaries, so it is not for everyone, but it is a great catalog of a forgotten body of work.