Keep Out of Reach of Children: Reye’s Syndrome, Aspirin, and the Politics of Public Health by Mark A. Largent 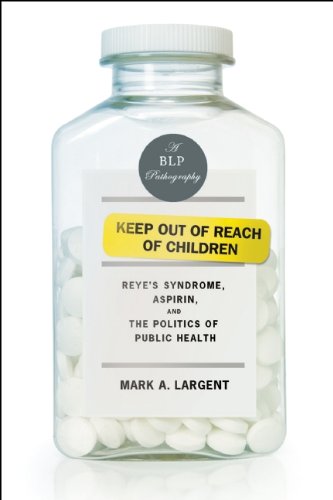 Reye’s Syndrome, a mysterious set of symptoms that appeared in the early nineteen fifties, was described by Dr. Ralph Douglas Kenneth Reye, an Australian physician, in a 1963 article in the Lancet. The disease peaked about 1980 with 555 cases, and by the mid 1990s had almost disappeared.

The Author, Mark A. Largent, himself a survivor at 21/2 years old, has written a fine book chronicling not only the medical mysteries but also the political maneuvers and the efforts of Aspirin manufacturers, among others, to obscure the research and protect their market.

Though the cause of Reye’s syndrome has never been found, it’s always (almost anyway) preceded by children’s disease such as influenza or chicken pox. Several things have been considered as causes: Insect sprays, aflatoxins, and, most familiarly, aspirin.

The problem with all of this is that none of these factors are present in all of the cases, and some have been disproved altogether. The indicators were found by case studies of victims from doctors and, in America, brought together by the Epidemic Intelligence Service, a part of the Center for Disease Control that did epidemiological studies to discover causes, or at least, contributing factors.

Aspirin has had a long history of safe, effective treatment of pain and fever. By the fifties, its use was ubiquitous in both adults generally, and children as well. Nobody thought that this was dangerous and, to tell the truth, after reading the book, we’re still not 100% sure.

H. McC. Giles, of Birmingham England was the first to suggest a connection between the use of aspirin and the symptoms of Reyes’ syndrome. Over time, more studies indicated aspirin’s involvement until finally, in 1986, the FDA required warning labels on aspirin products. But, not without a fight.

This book explicates the difficulties of epidemiology and of turning their findings into effective, useful action in the face of political and economic resistance. These factors are still very much alive in today’s world. If you are sometimes bewildered by the current struggle for science to make a dent against ignorance, it’s all here in Keep Out of the Reach of Children.