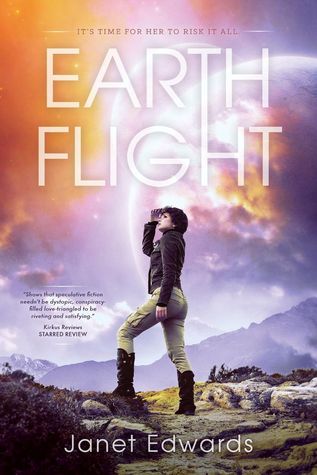 Earth Flight is the final book in Janet Edwards’s smart science fiction series, Earth Girl. Following the events of Earth Star, Jarra Tell Morrath and her boyfriend Fian Andrej Eklund are back with their class studying Earth history, but due to their involvement with the Alien Contact programme, their celebrity status is both a blessing and a curse. Jarra has become the poster girl for the Handicapped – humans born with the inability to survive on planets other than Earth – but this has also made her a target for bigoted humans who see the Handicapped as sub-human. Amidst the political frenzy caused by her pending clan acknowledgement and betrothal to Fain – a non clan member – the Alien Contact programme has discovered that the alien probe circling earth contained a map of the alien solar system, and they believe they have located it! More problems arise when it is discovered that due to a strange technicality of alien biology, Jarra and Fian themselves have to be present to activate the sequence in person on the planet’s moon. Jarra must find some way to leave Earth, without dying, in order to unlock the secrets and potentially save humanity from an alien threat.

Earth Flight is an amazing followup to Earth Star, and packs much more than a teenage love story between its covers. The book deals with complicated topics such as self-esteem issues, bullying, and typical young adult problems of figuring out your place in the world. However, the issue that the Earth Girl series deals with most strongly, and most effectively, is the issue of racism. In the world of Earth Girl, the year is 2789 (at least it is at the end of the series), and humanity has done away with racism in the sense of judging people by the color of their skin. It is implied that Humanity suffered two societal collapses, nearly destroying us as a species of both occasions. After an event that drastic, racism based on skin color or ethnic background disappeared because there was so much more focus on humanity surviving as a whole, rather than by ethnic groups. However, since then, humanity has continued to grow and new sense of racism developed focused on those humans who could not survive outside of Earth’s atmosphere. By putting the reader into the head of Jarra, Janet Edwards was effectively able to show that there was zero difference between the Handicapped and the Norms, other than their inability to leave Earth. Science fiction has often been a way for authors to hold a mirror up to society to reflect back its flaws, and the Earth Girl books do this with racism in a powerful and affecting manner. Is it sometimes difficult to read? Certainly. Should books like this be read anyway? Definitely.

The Earth Girl series is much more complex than the average run-of-the-mill YA adventure/romance, both due to its handling of mature societal issues and the amount of focus the book gives to the politics of the book’s universe. While some people might cringe with the idea of delving into a series that is steeped in politics, the books handle this in a wonderfully organic manner. The enjoyably well-rounded characters that populate the pages help ease the reader into this complex and fascinating world as readers will immediately find themselves caring about the character’s plights.

It is also nice to see a Young Adult book where the female protagonist is an agent of her own actions. While some of what happens in the world at large is beyond Jarra’s control – her inability to directly control the outcome of the political voting regarding treatment of the Handicapped – she is a constant and active participant in things that she can control. Rather than drifting along at the whim of fate or those in power, Jarra makes her own decisions and is not afraid to step up and speak out when she believes she needs to be heard.

While it might not be necessary to start the trilogy from book one, as books two and three adequately cover the plot, I’d highly recommend picking up Earth Star before delving into Earth Flight, due to how intrinsic the events of the previous book are to Earth Flight. Overall, this is a fantastic Young Adult trilogy that science fiction readers should add to their reading list, but is also a series full of heart that less genre specific readers will also enjoy.