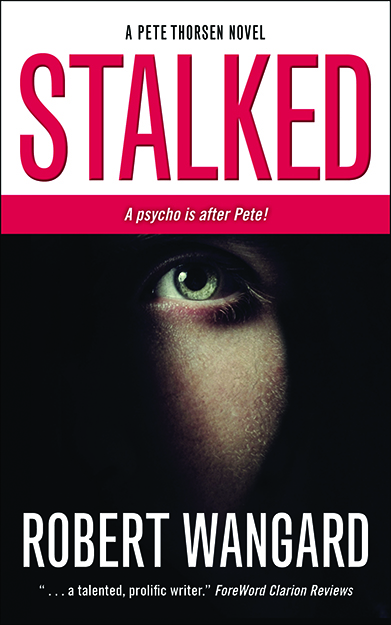 Stalked is the fifth installment of Robert Wangard’s Pete Thorsen Mystery series. This time around, someone is after Pete, a former big-city lawyer who left it all behind to live and practice law part-time in a small town in northern Michigan. The story starts with someone throwing a plastic bag of what appears to be blood against Pete’s front door. Beneath the bag, he finds a threatening note. More threats follow, including one against Pete’s stepdaughter, Julie. When the local sheriff fails to take the situation seriously, Pete teams up with Deputy Joe Tessler to catch who’s stalking him . . . before it’s too late.

Wangard has created not only a strong story in Stalked, but also a robust cast of characters. Pete is an interesting, sympathetic protagonist, but it’s the minor characters that make this book such a fun read. From Pete’s goofy best friend to the hippie alpaca farmers to the colorful barflies who help him locate some of his old enemies and possible suspects, the supporting cast elevates Stalked. The novel is a quick read, loaded with action, subplots, and twists. It’s especially fun for readers who are caught up on the previous installments. Wangard does an admirable job peppering in Pete’s previous adventures for new readers, but those details are sometimes a little clunky and can get in the way of the current story. Overall, Stalked is a satisfying and fun page-turner.