Keep It Blue by Haley Dean 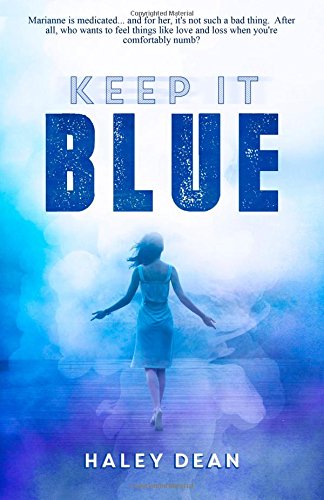 People with bipolar disorder typically require medication to stabilize their moods. However, prolonged usage of these medications may lead to a numbness of emotions. In Keep it Blue Marianne experiences this through the roller coaster life she has lead, and combined with her bipolar disorder these medications become a lifeline. After being abandoned by her mother, Marianne is fortunate to be raised by a family friend who loves her like her own. Growing up on the incredible coast of Oregon, she works a job helping others and feeding her coffee addiction, while living with her good friend who helps her stay on track, and stay on her meds. When her surrogate mother’s son, James, returns to town, Marianne tries to avoid feeling things for James she would rather put behind her. The rekindled romance and its expected complications, combined with the emotional ride of her on-again, off-again medication use takes a toll on Marianne. She learns how to be happy, how to stabilize and how to cope in spite of all the randomness that life can bring, which is only magnified when adding a person with bipolar disorder to the mix.

Keep It Blue is an insightful look into the mind and heart of a person learning to cope with the personal part of life and controlling their bipolar disorder at the same time. Random thoughts, erratic behavior, mood swings, and the good times mixed in, are all part of daily life. It takes a lot of love and patience sometimes, but as Marianne finds out, the right person is worth it. Haley Dean creates a perfect romantic ending with a promise for a future not only for Marianne, but for readers too. Keep It Blue transforms the romantic novel genre for people who don’t always expect a happy ending and shows that it is possible for everyone.

Q. There seems to be a debate over the treatment of bipolar disorder inside the community. How do you feel about bipolar medication therapy?

A. I think the issue lies in the turmoil within us. Our culture pressures us to conform; yet our obsession with celebrities glamorizes nonconformist musicians and such who suffer from mental afflictions. It’s confusing as hell. It’s cool to have posters of Kurt Cobain and Sid Barrett on your wall, but if they lived on your block as Joe Blow next door who happens to mow your lawn at 2am, is addicted to singing Pavarotti astride his a-frame rooftop during tsunami evacuation alerts, and believes that clothing is optional, your mom would probably tell you to avoid him. So you can imagine how torn we feel. For me it’s a matter of finding my own perfect level of insanity. What that looks like is a perfect chemical cocktail: a killer therapist who shares the same name as an eighties rocker, and an unfailing and fierce love from Ben. My point is, I’m a huge bipolar management advocate. Whether that’s with meds or not, you have to do SOMETHING. We eccentrics are innocently self-involved and a little self obsessed. It’s what makes us both interesting and frustrating when it comes to being in a relationship. Trust me, I know. Without meds, I’d be at the mercy of my disorder, which means I’d have minimal impulse control and that for me equals pure ruination of everything I’ve fought to build. I was once given a second chance, not many of us are so lucky.

Q. How similar are your own bipolar challenges to those of Marianne?

A. I tried really hard to portray an accurate account of what it’s like when I’m manic and related that to Marianne’s unique situation. More often than not, our bipolar is triggered by a traumatic event and comes to fruition usually in our early twenties for women. My bipolar was triggered in the same way as Marianne’s. It is tragic and definitely mind bending. I don’t think I realized just how much it affected me until I was trying to build a life with Ben. Many of us have similar traits, but we all manifest it differently. It’s why we are so hard to figure out. There’s not much predictability.

Q. Marianne was tremendously fortunate to have Mrs. Williams in her life. Was she a reflection on a mother figure in your own life?

A. I was raised in a very religious culture where, before the fall of innocence, felt very utopian. It was tribe-like in its community of nurturers. Mrs. Williams is a melting pot of my own ideation of mothering, but what you don’t read about in this novel is what I call her chosen optimism, which is typically a survival technique born of great tragedy. I think there’s more than meets the eye with Mrs. Williams. A solid, nurturing, consistent, and patient environment is critical for children, but not all of us have been so privileged. Nature vs. Nurture unfortunately can be tied to the limitations your family faces. Like poverty or lack of medical care and metal health support. I think Mrs. Williams was faced with an incredibly difficult decision, which for her was a no-brainer, but many might not have been so open to raising such a broken and potentially problematic child. People like her exist, I know of a few treasures myself and she was based on them.

Q. What was your main inspiration when it came to writing this story?

A. The pure ignorance and misconceptions about my kind. I wanted to show that it is completely possible to have a rich life and sweeping love story right alongside a struggle with bipolar. I wrote it as a first-person narrative so that you could see how our future can feel so uncertain and what a rabbit hole racing thoughts can be. I wanted to give hope and comfort to those who crave a fulfilling relationship, but are faced with painful statistics and social stereotypes. Keep it Blue is about embracing your polarities and fighting for the silver lining.

Q. This book captures the hope and desire that anyone has for love. In what ways do you feel people with bipolar disorder struggle in their search for love?

A. According to Dr. Google, 90 percent of all relationships fail when bipolar disorder is a component. How comforting is that? Feels kind of like a cement bath to me. It’s no surprise that with all the negative misinformation out there that we feel like our endgame is predetermined. Why try when we are already on trial before we begin? There’s really no trick to being in a relationship with someone who has bipolar disorder, it’s just about patience, compassion, and a complete refusal to contemplate failure or defeat. I don’t deal in ultimatums; I deal in compromise and negotiations. Isn’t that the key to all successful relationships? We are just a bit more colorful. We just want to be loved, valued, and accepted; guts, feathers, and all. Don’t you?

Q. You quote lyrics often in the book. What artist/genre means the most to you and do you believe that music can be its own therapy?

A. Music is my life. When my brain is nothing but word-salad, music says it for me. The music I wrote about in Keep it Blue was like my gift of a perfect play list for those a little left of center. I depend on music to help me make sense of my labyrinthine brain and give me the mental vacation that opiates and alcohol used to do. It’s an incredible tool if you’re not the best at expressing your feelings. Ben and I have always written music. We have played nearly every night together since we met and founded a band called Shores of Astor several years ago. We’ll probably release an album later this year.

It’s nearly impossible to name a favorite song! That’s kinda like choosing children. Anyway, if I had to pick one for this moment, I think it’d be a tossup between Elliot Smith’s, “Say Yes” or Gregory Alan Isakov’s, “That Sea, the Gambler.” If I had to pick a bipolar theme song though, I’d probably pick something like “Ghost Reveries” by Opeth, which is more of a math rock/metal band with sweeping ballads and intricate guitar work. Opeth has a way of taking me on a complex emotional journey, and not all of it is pretty. But hey, I do love a bit of drama as long as it’s not always mine… They’re rad in concert.

Q. What is your next writing project, and if you are planning a sequel to Keep it Blue, what adventures will Marianne and James be headed towards next?

A. I’ve already written the sequel and I’m currently working on the revision process. In my opinion, the second book should always be better than the first, so there’s a greater self-imposed expectation that I’m trying to live up to. In the sequel, we’ll see some of the real work that goes into maintaining a relationship between to broken people and the dangers of obsessing over events of the past. It’s undoubtedly more dynamic, passionate, and raw, but captures the essence of the first book. We take a closer look at James and could possibly see more of a role reversal.

You can watch for updates on my author page at www.facebook.com/haleydeanauthor

Q. What message concerning people coping with bipolar disorders do you hope for readers to take away from this story?

A. Don’t be a statistic. Don’t perpetuate social stereotypes. Never stop fighting for love. Communicate. Don’t let your bipolar define you and don’t abuse it. Your bipolar is a drug, so treat it with care. Know your limits. Enjoy the high in moderation, and for my sake, trip wisely and take a guide you trust. Above all, don’t let your insecurities prevent you from sharing your light with the world. We deserve to see your brilliance, so take a step outside yourself and try to see what others see in you. There’s no shame in being born with a kaleidoscopic mind, so find a way to share it. You are capable of making your own choices, and if more than three of your relationships are unfulfilling and failing, chances are, you probably need to look inward and make some changes. Just remember, you’re changing behaviors, not who you are. Don’t forget that.