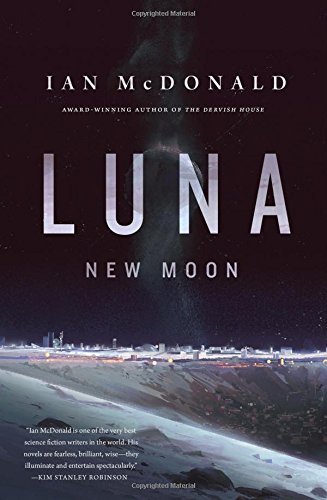 Luna: New Moon, written by Ian McDonald, is the tale of five families vying for power whilst living on the moon. Set in a science fiction-based near future, readers are introduced to the Corta, Mackenzie, Asamoah, Sun, and Vorontsov families. The struggle for power between these tycoons is aggressive, and when a member of the Corta’s is almost assassinated, the families find themselves sitting on the brink of an all out war. The customs and rituals of this new world are explained in McDonald’s innovative novel, and the complex romantic relationships betwixt opposing families are explored. It becomes clear that living on the moon can take its toll on a person, both physically and morally.

The series A Song of Ice and Fire, written by George R.R. Martin, seems to have inspired a whole new form of storytelling, in which authors throw a ton of family trees into one book and make it nearly impossible for the audience to remember who is who. This is not necessarily a bad thing. When done right, it can be rewarding, truly submerging the readers into this new reality – just look at how Martin’s succeeded over the years. McDonald, in Luna, has taken this same approach. At the front of the book, readers are introduced to all the members of the five main families, as well as the entire cast of side characters. Though perhaps not as long a list as Martin’s, it still sets a standard before the reader has even read the first page. This does bog down the book at times, but more on that in a moment. First: onto the positives.

Luna provides an amazing, futuristic universe set in 2110. It begs the question: what if humans had conquered the moon? How would they go about attaining power and ruling this new terrain? The story is innovative and fresh, on top of being pleasantly well written. In focusing on the five clashing families and torrid romances, the book has a feel of The Godfather meets A Song of Ice and Fire meets Ender’s Game. The family trees are well thought out and have coherent conflict, and there are certainly several favorites that stand out amongst the large cast of characters – Luna, Abena, Louisika, Rafa, and Marina, to name a few.

The best part of this book, hands down, would have to be the diversity of the characters. With perhaps the exception of religion, diversity is positively everywhere in this text. There is equality amongst the female and male characters; women are just as powerful in Luna, if not more so in certain family dynamics. Sexism appears to be completely non-existent in this world – a delightful change from the normal standards of sci-fi novels. Not to mention the families are of different races – Australian, Portuguese, and Russian, for example – providing representation of several different ethnicities. Then there is sexuality. As a whole, sexuality is embraced and not shied away from in the slightest. The characters consist of those who identify as straight, gay/lesbian, bisexual, asexual, polyamorous, monogamous, and the list goes on. To have that amount of inclusion in a book is positively wonderful and so rarely seen. While sex is a popular topic discussed throughout the novel, there are only a couple graphic sex scenes in the entire book.

Though an interesting outlook on how humanity might grow if people took to space, Luna is not without its faults. The book feels about a hundred pages too long; sections tend to ramble on longer than need be. Embellishing descriptions and elongating dialogue can be enjoyable, but so often scenes in Luna feel as if they are dragging their feet. On top of that, there are the characters. While there are a select few who manage to shine, the cast itself is far too large, making it easy for the characters to get mixed up or completely forgotten until they appear dozens of pages later. The problem isn’t necessarily that there are too many characters; it’s more that there is too much focus on so many characters. The story can’t seem to find a center. Unlike George R.R. Martin, who picks a handful of characters to spend his series following closely, this book jumps around to almost every character at some point or another. It becomes difficult to care about these people when there are so many that the reader has to constantly flip back to the starting index to remember who is related to whom or why they are of any importance. While still an enjoyable book as a whole, this is both frustrating and debilitating at times.

A final note: the book does have an abrupt ending. No spoilers of course, but it is uncertain whether or not McDonald has a sequel in mind. Even so, some closure or a more solid ending would have been appropriate to tie everything off at the end, while still leaving a vagueness to lead into a sequel.