On the Move: A Life by Oliver Sacks 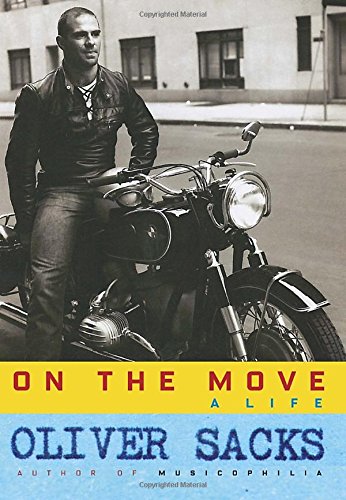 Oliver Sacks is an eminent physician, a neurologist of uncanny intuition. He has also become an eminent writer whose craft has grown and matured across the decades and the dozen books he has produced. In addition to being a New York Times best-selling author, he has also garnered a Guggenheim Fellowship in Natural Sciences, a staggering set of achievements that says a lot about who he is: an unremittingly curious scientist and a deeply committed writer. Throughout On the Move: A Life, he wrestles with whether he’s one or the other; it turns out he is both, a rarely gifted individual with a foot planted firmly in both worlds.

In late 1966, he began studying and working with patients who had survived an “extraordinary encephalitis lethargica (or sleepy sickness),” some of whom had been “not unconscious but with their consciousness suspended at the point where the disease had closed in on certain parts of the brain.” Some had been in that state for thirty or forty years. Sacks began treating them with L-Dopa, a controversial compound that is a precursor to dopamine, and the results were astounding. He wrote a book about it: Awakenings. It catapulted him to international fame and resulted in an award-winning movie starring Robert De Niro and Robin Williams (who played the part of Dr. Sacks).

But Dr. Sacks’s book wraps around Awakenings as a complete whole, and his accomplishments as a physician and writer are only part of the story. He leads us through his childhood, his discovery of his sexuality, his drug rampage in the sixties, his love of going fast on motorcycles, and into his eighties as a wise and still-energetic man. He weaves vignettes with friends, lovers, his family, and his colleagues with delightful skill and never leaves the reader to guess where he stands on any issue. He is, at times, disarmingly honest and candid.

Throughout the book, he ponders questions that are important to us all and brings humanity to people afflicted with conditions that range from strangely amusing to deeply paranoid to downright bizarre (see his book The Man Who Mistook His Wife for a Hat). The stories he tells about discoveries of the ramifications of brain diseases and the writing of his books is compelling. One of the strongest threads throughout the book illuminates that all of his patients are human beings, with everything that that brings to the table. Sacks never lets us forget that.

Perhaps the crux of these interwoven tales is how he grows as a human being. It is delightful to follow him through his journeys from curiosity to revelation. He accomplishes these voyages with an ease that belies his own darkness and his enlightening discoveries. It is difficult to bring that ease through the crucible of writing an autobiography and presenting it as a profound memoir, but Dr. Sacks brings us along at a comfortable pace and never loses us, even when providing us with technical neurological details. His vocabulary is immaculate and his overriding kindness makes the reader’s journey with him seem like an intimate friendship.