A Planet For Rent by Yoss, translated from Spanish by David Frye 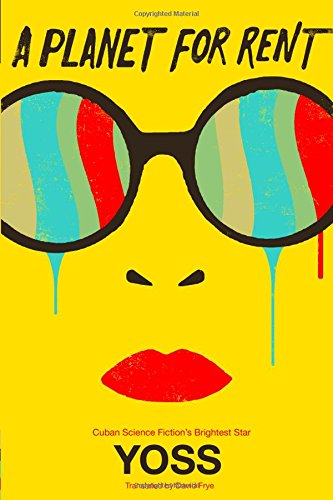 Planet Earth is nothing but a backwater tourist trap in A Planet For Rent, written by the Cuban science fiction author Yoss and recently translated into English. Told in seven loosely linked stories (with a few vignettes to help explain this new Earth interspersed between), this novel illustrates the frustration and futility of the human condition in galaxy full of technologically superior xenoids (i.e.–aliens) who exploit “inferior” humans to keep them groveling, subservient puppets for xenoid profit and pleasure. From “social workers,” whose trade is sex and whose only ambition is to trap xenoids with their lusty appetites in order to earn passage from Earth, to idiot-savant scientists who are taken off-planet so humans do not gain working knowledge of certain technologies, these seven tales all tell of desperate humans who would do anything to escape Earth’s low lot among the races of the galaxy. These seven tales also speak of remarkably familiar xenoids who are full of greed and willing to do anything to keep humanity in its abject place among the races of the universe.

To get right down to it, this brilliant book is a must-read for any fan of literature or science fiction. It is incessantly entertaining throughout—but more than that, it is also a fabulous political commentary on social justice, making the book not only beautiful and enjoyable, but also weighty and perhaps even important. I can see a copy of this book being made into required reading either in a world literature or a Latin American politics course. I cannot recommend it enough. Yoss is not misled by a need to describe this new, alien-infested world he has created (on the contrary, this world is not that different from our own), but rather focuses on the deepest desires of the human characters therein (not all of these desires being good or decent or moral—but all understandable and undeniably human as they futilely clutch at a hope for a better tomorrow). These characters are easy to love, easy to hate, easy to pity, and easy to cheer—all at the same time! But it is not about these characters being good or bad; it is about them being human and no different than any xenoid race despite their abused and subjected status throughout the galaxy.

The first story follows Buca, the “social worker,” as she delves deeper within an astroport led by Selshaliman, an insectoid xenoid who is Buca’s only ticket off the planet. She is looked on with envy by all the other social workers who congregate around the astroport selling their bodies, only hoping to be so lucky as to catch the eye of an alien and be led away from Earth—an Earth kept in perpetual poverty and squalor except for those places set aside for the xenoids. Buca’s only catch: she is being taken away by a grodo who plans to impregnate her with its spawn, the birthing of which will kill her. But Buca hopes only for a few good years living away from Earth before this happens.

Moy is a performing artist touring the galaxy with his agent, Ettubrute, a huge Colossaur who is an outcast among his people for his predilection for art. Moy lives a fabulous life for an artist, full of sex and drugs and lots of cash—the one caviat of this galactic tour: his mind will be wiped before he returns to Earth, just as any human’s mind is wiped before returning from more advanced worlds. His show becomes a huge hit on Ningando and, after a show, he is offered a lucrative contract with a string attached—he must perform a grueling nine shows a week, leaving no rest between show and rebirth.

Voxl is the galactic sport, with fans as fanatic as any football team’s. Daniel is the team captain of the planetary team set to play a yearly match against a Galactic League team—against whom no human team has ever won. But voxl is a tough sport. The competitors twist and bloat their bodies into perfect playing machines with a generous cocktail of drugs and incessant training.

Sergeant Romauldo Perez teaches a new recruit the ropes of Planetary Security—namely, those things they don’t teach you in the academy. Bribes and graft are all a part of business according to the Sergeant; it’s not about sticking it to the small guys or the fish that are too big to fry, but those in between whose capture and imprisonment makes an example so that Earth looks like a safe place for xenoids to visit. To the Sergeant, being a part of the system (even a corrupt one) is a whole lot better than being outside it.

Alesio Perez is an inventor, a bit of a savant with technology despite his lack of formal training. He was found in some backwoods by a couple of professors when their aerobus broke down. They took Alesio back to civilization with them and quickly began to exploit the lad. Alesio was locked in his lab (social workers brought to him if that is what he desired), held captive in the utmost secrecy, used by Earth to advance its technology progress in an attempt to level the playing field with the xenoids.

Recently released from Body Spares (a type of prison sentence in which your body is leased out to xenoids like a rental car), Friga, Jowe, and Adam desperately seek a means to escape the tyrannical exploitation of Earth by building their own space ship and traveling out of the system. The only problem: there are multiple checkpoints and patrols designed to keep humans on Earth—just like a prison sentence.

Finally, young Liya is picked up out of the slums by our friend, Ettubrute, who spends lavish amounts of money on her and shows her many of Earth’s beautiful locales. But Liya does not know why Ettubrute has chosen her. She offers sex to Ettubrute, thinking that this is what the xenoid is after, but Ettubrute declines. Liya is thankful, but ultimately grows jealous as she sees Ettubrute patronize artists in return for sex.

With even these broad strokes, a picture is painted: Earth is a destitute, corrupt corner of the galaxy—loved by no one, exploited by all. So, too, was Cuba in the 90s. Like Earth, Cuba was a jail that none could leave, kept poor and isolated by the more advanced and “civilized” countries of the Earth. And people would risk all to escape. And that is what Yoss so brilliantly captures in his writing and why it rings so true: these people trying to escape Earth, they are desperate and willing to do whatever it takes to leave behind the constricting world they know for even a short-lived life of freedom. There is no greater need that rests in the human heart than the need for freedom, the need to make our own mistakes, the need to be allowed the opportunity to better ourselves. If this opportunity is not supported by the system, then humanity will find another way—no matter the danger and depth of obscenity one must traverse through first to get there. As such, A Planet For Rent is like a hymn to that insurmountable human spirit. But it is also a warning, a call to justice; humans need not suffer so. All this exploitation could be avoided if others, whether human or xenoid, Cuban or American, poor or rich, were to be treated as equals and with respect. Then humanity would not need to be brought low, selling mind and bodies like social workers, desperate for just the chance of a better tomorrow.

Ultimately, we are all no different than any of our other human counterparts in our uncompromising desire for a better world—thus we are equals. The most poignant part of the book for me was when the bigwig xenoid in charge of releasing Planetary Security from the bonds of corruption, mitigates the Sergeant’s punishment in an act of corruption, becoming guilty of the same crime he fights—except that he is a xenoid and incapable of this guilt. This contradicts any notion of justice, the only form of justice, as justice should never change relative to whether one is human or alien, poor or rich, Cuban or American. The xenoids are just as corrupt as the humans, despite the money spent telling the masses otherwise. Xenoids prove here that they are no different than humans and as such should be held to the same standards. But the universe doesn’t work that way; the rich and powerful exploit with ease the more unfortunate. All that the exploited hold is this neglected sense of justice and a hope for a better world. With this in mind, A Planet For Rent becomes more than a mere work of science fiction, or a hymn to the insurmountable human spirit, but also a reminder to social justice—made more palatable by its science fiction setting and its engrossing characters.

But don’t let all this talk of justice scare you. Even without all this stuff, Yoss’ book is still a compelling patchwork of science fiction with all its great tropes and an even greater style of writing. These stories are told with such diverse and distinguished voices. The escape from Earth is told in the laconic style of Friga in short, matter-of-fact sections so like the tough figure that she is. The Alesio Perez chapter appears to be a transcription of an interview with Alesio as he seeks asylum from Earth, but the answers are all jumbled and disjointed from the socially awkward, autistic Alesio. Sergeant Romauldo Perez rambles slowly on to his new recruit about every topic that comes to mind more for his own sake than his recruit’s so that the responses of the recruit are not even penned to the page. Yoss seems to have that rare talent in writing that only functions to further the characterization of his protagonists—making them all the more engaging and entertaining—while not losing the meaning of the whole and a sense of self.

The release of this book (as well as the proliferation of other international science fiction stories being translated for the first time into English) opens up whole new worlds of thought and experience for English speakers and we should promote these books as best we know how: reading their words and promoting others to do the same. As Americans we get caught up in our own view of the world and perhaps forget the views of others who seek new and better lives, risking all in the process of crossing a sea or a border. Perhaps it is even our duty to read what these people have to say—to shorten the gap between the people of the Earth and to grow in the understanding that we are all just one human race in it together, just one alien invasion away from being turned into the cesspool of the galactic universe. At least let’s not make it so easy to justify such treatment. So read a book outside your comfort zone and take a chance on A Planet For Rent.