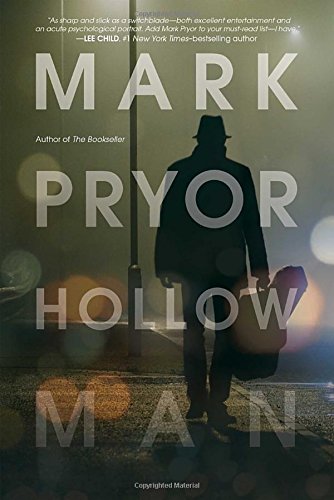 Hollow Man by Mark Pryor is an incredibly addictive book that mystery fans are going to want to add to their to-read list. Dominic is having the worst day ever, beginning with bad news about his parents, a demotion/promotion at work, and an accusation that his songs are stolen from someone else. On the upside he meets a beautiful and strangely aloof woman, although she ends up getting him involved in a heist that devolves into capital murder. Can Dominic trust his partners in crime to back each other up, or will they all go down together?

This is a book with a slow build, reminiscent of most heist type films where the characters spend much of the time plotting and the action is brief. However, Hollow Man is never boring, and will likely hook the reader from page one. A big part of the draw is Dominic himself. He is a fascinating character with many different facets, the linchpin being that he’s a psychopath that has been passing as normal. Dominic has learned the proper responses expected of him in given situations, and he is a very good mimic. Being able to view the world through his eyes is both fascinating and somewhat disturbing.

As for the plot, Mark Pryor manages to manipulate your expectations in such a subtle manner that it is unlikely the reader will figure out what is going on until the very end. A masterfully executed and an engaging romp with some morally ambiguous characters, Hollow Man is well worth the time.