The Virgin Diaries by Bianca Rowena 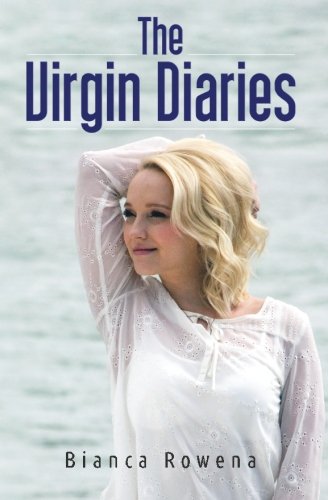 Abby is a twenty-nine-year-old virgin, but not because she doesn’t want to have sex – it’s too painful for her to try. Fed up with being smothered by her overbearing mother, a boyfriend who doesn’t understand her, and of letting her anxiety disorder drive everything she does, Abby decides to go on a spontaneous trip with her best friend. In this first major act of rebellion Abby finds herself on the shores of Skaha Lake where she runs into Jade, the first boy that has really made her want to figure out a way past her problem. However, she can’t avoid real life forever and Abby must go back home and make a choice. Should she go through with the potentially loveless marriage to her boyfriend, or throw caution to the wind and pursue a true romance, even if it may not last.

The Virgin Diaries is a New Adult romance, geared primarily toward women in their mid-to-late twenties. The book is enjoyable, easy to get into, and a surprisingly fast read. The book touches on topics common to the targeted age bracket such as anxiety over the next stage in life (post college), career decisions, and concern over choosing the right life partner. It also touches on some more morally and ethically gray areas such as unprotected sex, and relationships with a much younger partner.

While Abby’s age should fit the book solidly into the New Adult genre – as well as the topics regarding sexual functionality – she doesn’t really seem to act her age. Yes, she struggles with severe anxiety which makes her shy and unassertive, but the extent to which she has let her mother and her disorder dominate her every decision until now doesn’t ring quite true to life. It is particularly unlikely that a woman of her age would not have even bothered to think about looking online for ways to solve her sexual dysfunction, particularly seeing the popularity of Google in our current society and the prevalence of the Cosmopolitan magazine on stands at the grocery store.

Abby also comes across as somewhat unintelligent (despite her supposed good grades in school) due to how long it takes her to figure out what was going on with Jade. While the book does mention at the end that she had chosen to ignore the signs, that doesn’t balance out the fact that readers will be continually frustrated with how dense she seems during the story until that point. The fact that she and Jade choose to have unprotected sex is considerably problematic due to the fact that knowledge about ways to prevent unwanted pregnancies and prevent against STIs is readily available, and may be particularly frustrating in this case due Abby’s reasoning that “She never imagined one time could….” For a twenty-nine-year-old woman raised by a wealthy family, and therefore theoretically having received a good education, her behavior in these moments can easily shatter suspension of disbelief and pull the reader out of the story.

While it was nice to see a male character not be too squeamish to look up a possible solution to Abby’s problem, the fact that Jade did think to do so raised a flag with his characterization. Jade’s age is never really established beyond mentioning that he’s legal, but several years younger than Abby – although based on the ending of the book he is probably closer to 18. Despite being younger than Abby, he comes across as the older, and more mature character. While part of this is due to his particular situation, it is incredibly hard to believe that an 18-25 year old male would be able to do research regarding female sexual dysfunctions without giggling. Again, it’s nice to see a male character that is not your stereotyped jock all the time, but his specific level of maturity may be a slight stretch for some readers.

The book also has a few moments early on that may raise some eyebrows. For example when Abby and her friend Clarissa first arrive at the lake Abby wakes up having no idea where she is, despite being the one who was doing the driving the previous day. Abby also wants to be a Manga artist. Manga is specifically defined as a style of comics that are created by comic artists in Japan that are originally written in Japanese. While American comic artists may sometimes draw in a Manga style, they are not considered to be Manga artists by the comic book and graphic novel community.

Overall, The Virgin Diaries is surprisingly easy to get into, but readers may find themselves pulled out of the narrative a few times when certain things don’t ring quite true. Despite taking place over a short time the attraction between Abby and Jade is surprisingly heartfelt, and that honest emotional connection will be what sees readers through to the end.