All the Things We Never Knew: Chasing the Chaos of Mental Illness by Sheila Hamilton 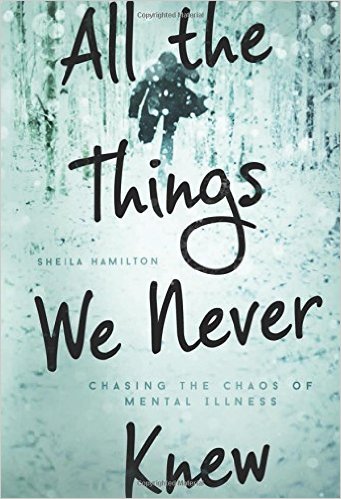 In this debut memoir, reporter Sheila Hamilton recounts her tumultuous relationship with her late husband, David, and his ultimately fatal fight against bipolar disorder. Sheila and their nine-year-old daughter then try to make sense of what happened and rebuild their lives.

As a story, it’s a good read. It isn’t an easy read – it’s intense – but the struggle these people dealt with over the course of a loved one’s illness and death, and in picking up the pieces afterward, is certainly moving.

When it comes to relaying the specifics of bipolar disorder, though, there’s an awful lot she gets dead wrong, and she has painfully obvious biases against medication due to David’s negative responses to the specific ones he was given (the worst of which no competent doctor would have prescribed if they’d known which condition he actually had).

The errors regarding the diagnosis’s details are probably rooted in her taking David’s case to be what all people with bipolar II disorder are like, with only a few cursory nods to other possible presentations. However, understanding that doesn’t make it less cringe-worthy, especially when she mistakenly attributes some of his more undesirable personality traits to the disorder. For example, when she first learns of his diagnosis, there’s a paragraph going over what type II looks like, including the presence of irritability instead of the euphoria of full-blown mania, lying, and infidelity. She also at one point agrees with the assertion that “mixed depression” could be an apt alternative name for mania. To break down what’s wrong with all that, type II often does include euphoric hypomania, and full-blown mania is often not euphoric; mixed states is very much not the same thing as regular mania; and infidelity might occur as an extension of hypersexuality, but it, like lying, is definitely not a symptom of bipolar disorder.

There does occasionally exist some solid information in the sections departing from the story at the end of each chapter, but it still seems like she might have done some actual harm in perpetuating misinformation and biases in many places throughout the book. Overall, though, as long as you take her information regarding bipolar disorder and its treatments with a grain of salt, it’s still a reasonably poignant story.