Shards of Heaven by Michael Livingston 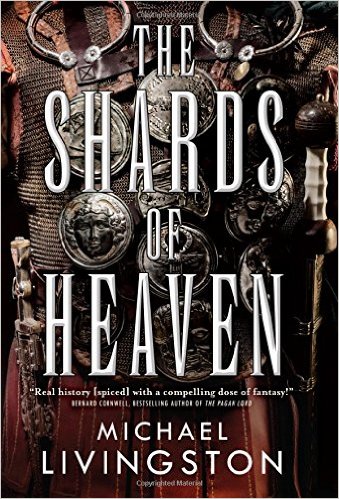 Shards of Heaven evokes Rome in the aftermath of Cesar’s assassination. With viewpoints that alternate between a ruthless Octavian, his adopted younger brother, Juba, and Cesar’s other heir, Cesarion, his son by Cleopatra, this novel is diverse and captivating. Livingston imagines a world painstakingly aligned with our own history, but in which the artifacts of the gods are real. After the discovery of the Trident of Neptune by Juba, how will these powerful artifacts influence the struggle between Marc Anthony, Cleopatra, and Octavian to hold and control territory in the Roman world?

Livingston’s research is thorough, but it is in his complex and nuanced characters that this book really shines. Too often, historical fiction reduces characters, especially minor characters, to two-dimensional stereotypes. Livingston does the opposite: his richest and most interesting characters reside at the edges of his novel. This book will probably not appeal to all fantasy readers; interested parties will likely have at least some knowledge of the historical events that form the scaffolding for the novel. Even readers with only general knowledge (or who dimly remember Shakespeare from high school) will enjoy the characters and the moral quandaries posed by this novel.