Healing from Incest: Intimate Conversations with My Therapist by Geri Henderson and Seanne Emerton 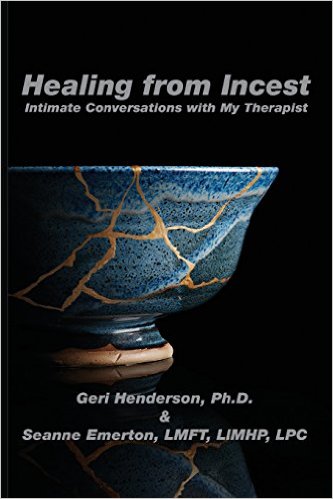 Healing from Incest: Intimate Conversations with My Therapist is a therapeutic story of surviving an incestuous childhood and the recovery process as an adult. The book is written as a dialogue between Geri Henderson and her therapist, Seanne Emerton. Henderson recounts her story as told in her sessions with Emerton, and Emerton offers opinions about and interpretation of Henderson’s observations.

Healing from Incest is truly about Henderson’s healing process after her childhood experience of sexual abuse by her father. This incestuous relationship shaped Henderson’s senses of self and self-worth, and led her down a path of continued abuse, rape, and feelings of worthlessness. However, Henderson did set out upon a path of healing, through which Emerton and others helped her to process her experiences and heal from her childhood.

As a reader, this book is challenging to read for two reasons. The first is that incest is a heavy topic. Sexual abuse of any type is so abhorrent in most societies that the idea of reading a book solely about incest is off-putting. It’s also not a topic that is generally aired and thrust into the light. That said, tales of survival and information related to incest and sexual abuse have long been needed. Henderson’s willingness to bring her story to the public is certainly courageous. However, I question its readability even for survivors. The story starts in the middle and is told much more in the style of “What I learned in therapy” rather than “Here is my story.” In many ways, I think that a survivor is looking for any scrap of shared history. The idea of “Yes, that happened to me too” is what makes such tragic reality into the relief of not being alone. When Henderson does begin to untangle the parts of her story that involve description of her abuse, the details are sloppily tossed in, which is startling for the reader.

The second aspect of this book that is challenging to read is the text’s dialogue format. The book is written such that Henderson describes a session or insight, followed immediately by observations of those descriptions by Emerton. The book feels like a personal observation of a private conversation. Henderson writes about her interpretation of a specific point in her life, what she experienced, and how she felt; Emerton writes about where Henderson was in the therapy process. It’s difficult to step into that type of intimate space in a helpful way. Because there was not a story line plot per se, reading the book felt much more like watching a mildly interesting show that you are willing to quit if something more interesting comes along. The subject matter is of interest to most, but the presentation makes it hard to stay engaged without a strong commitment to do so.