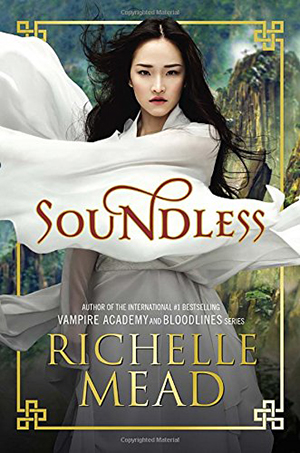 Richelle Mead’s Soundless is a standalone novel that attempts to tackle Chinese folklore. Fei and her fellow villagers have been trapped at the top of a mountain for generations after a rockslide blocked the pass. The whole village is deaf, and has been since the pass became blocked. They survive by mining minerals and sending it down a zip line in exchange for food. However, now villagers are falling prey to blindness as well, meaning that there are fewer miners working. When the metal trade slows down, so does the food. Things are becoming desperate, so Fei and her childhood friend, Li Wei, decide to attempt the dangerous climb down the cliff face to see if there is a way to save their village. Her newfound ability to hear may be the only thing to keep them alive, if the added distraction doesn’t kill them first.

Soundless has some interesting points, mainly how a society completely composed of the deaf has managed to exist in such a precarious manner completely isolated for several generations. However, if readers take a half step back while reading the problems begin to accumulate quickly. First, there is the question of how the zip line was set up in the first place, compounded by the question as to why they never bothered to work on clearing a path through the rubble. Even if the stones were large, a whole village should be able to shift enough of them (particularly over several generations) to find a safe way back down the mountain.

The caste system that the village created made little to no sense. Why would the miners, the people solely responsible for digging up metals they trade for food, be the ones who were at the bottom of the totem pole? How on earth were they the strongest villagers when they were fed the least?

The Chinese culture in the book is so subtle, that it might as well not have been there at all. Other than the character’s names, brief mentions of calligraphy, the Pixiu creatures that don’t show up until the very end, and the names of a town or two, this story could have taken place in any generic fantasy world. The character’s were relatively two-dimensional, and the story was resolved in a very convenient Deus Ex Machina fashion.

While the book may be better appreciated by already existing fans of Richelle Mead, most readers will likely find the book uninspired and somewhat disappointing.