The Magic of Cape Disappointment by Julie Manthey 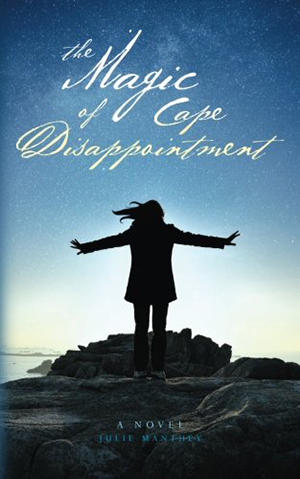 Kay had never planned to settle back in her tiny, small, barely-on-the-map hometown of Ilwaco and its nearby cape named Disappointment. She wanted more out of her life. She was determined to make her own way and become a success in New York as an artist. Her plans go awry, however, when her parents are killed in an accident, leaving Kay to care for her grandmother. Once back in her hometown, Kay begins to learn more about her family. She always knew that they were descendants of Meriwether Lewis, but she never knew that she was part of a family legacy that helped keep Cape Disappointment and its people safe. Kay also meets the new next-door neighbor, Sam, and finds that he might be someone special. It’s up to Kay to decide if she will help the people of Cape Disappointment or let her fear drive her away.

The Magic of Cape Disappointment, by author Julie Manthey, is a fun spin on a romance novel. It centers on Kay and her early life crisis when her life is thrown into chaos with the death of her parents. Kay’s determination to lead a different life than the one her parents led is evident from the first pages of the book. She is adamant about not following in their footsteps and being a healer and getting invested in family history. Kay holds onto that determination even after she realizes that she will need to stay in Cape Disappointment and care for her grandmother. When she starts getting to know Sam, she is both interested and fearful. She is terrified of feeling stuck in one place and not being able to live her own life. Things change slowly for her over the course of the book. Her growth as a character creates an enjoyable character arc for the reader. The supporting characters in the book are well written and each has a specific purpose in the story – no superfluous characters here. The plot unfolds steadily and has a nice mix of magic, history, and romance. Overall this was a satisfying read that fans of romance and general fiction novels will enjoy.