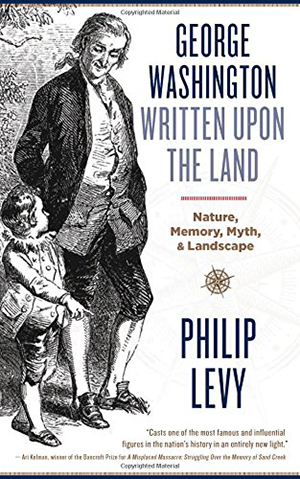 Despite the existence of so many books about George Washington, Philip Levy finds a way to make a significant and interesting contribution.  His book looks closely at Washington’s childhood years to see the different ways this story has been told and how we might tell it differently in the future.  The book ranges from biography to historical archaeology to issues of climate change and rabbinic thought.

Levy deftly weighs a variety of versions of the Washington childhood, particularly as they relate to Ferry Farm, where Washington spent a part of his childhood and where Levy spent more than a decade excavating and researching.  Levy analyzes how Americans have used and fought over images, narratives, and valuations of Washington’s childhood in creating their own historical meanings.

Levy’s use of historical archaeology, in particular, is a flexible and creative way to talk about the intersection of places, the past, and the people who inhabited both.

In reviewing the vast literature on Washington (noting that a search of online library catalogs lists 21,816 books with “George Washington” in their titles), Levy notes that Americans have created fake Washingtons to suit our psychological or patriotic needs, while at the same time, the need to know Washington has compelled every biographer who hoped to capture something real and meaningful.

It is Levy’s use of historical archaeology that adds even more, epistemologically, to what we know (or do not know) about Washington’s early years (as well as those of his family).  Levy has spent several years overseeing the excavation of the Washington family home at Ferry Farm, something strikingly absent from most biographies of Washington.  Levy observes that the silence about Ferry Farm had an effect on the land itself, and, ultimately, on the site’s archaeology; by passing it over, writers crafting the Washington narrative denied Ferry Farm the very historicity it might otherwise have had.  More specifically, an indexing of the many items found at the site provided evidence of the choices being made in and around the Washington home – family economies that a young George Washington would have experienced first hand.

Bolder still is Levy’s argument that Washington was present at the commencement of an ear of human history known as the Anthropocene Age; describing a time in which human activity has had an effect on the climatic and environmental conditions of the planet.  Humankind has moved from being one of many forms of life on the planet to being one whose actions and consequences have reconditioned the prospect of all life itself.  Occupying most of Levy’s observations here is less Washington, and more about the need to eliminate the separation of the natural and the human as objects of observation; that the distinction between so-called humanistic intellectual endeavors, such as history and the natural sciences, is no longer meaningful nor necessary.

Washington has been, and will likely remain, an important figure in American history.  Levy emphasizes how Americans in general, and his biographers specifically, have commodified the man into a concept, an icon, often to advance patriotic needs.  Levy does not simply add yet another recounting of the early life of Washington.  While he does not say as much, Levy’s epistemological challenge can be used to address other such commodified individuals.  His is an excellent contribution to the sub-field of Washington’s life as well as to the field of history in general.