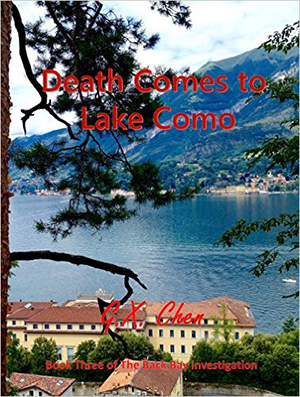 Death Comes to Lake Como is the third installment of G.X. Chen’s Back Bay Investigation series. It picks after the previous novel, The Fatal Sin of Love, and delves into a whole new mystery for the protagonists to uncover. With Fang Chen and Jane Tian finally married, they leave to honeymoon in Italy, corresponding with their good friend and work partner, Ann Lee, during their travels. As the honeymoon comes to a close, Fang and Jane find that a murder has taken place in their hotel at Lake Como. When the murder in Italy suddenly ties itself in with a murder that, not long after the first, takes place just down the hall of Ann’s apartment, Fang and Ann must put their heads together to crack their latest case.

As a whole, Death Comes to Lake Como is a lighthearted and fun read. Despite being a mystery novel, the book never gets too graphic or dark, even when the murders are being investigated. There is a nice flow to the book, making it easy for the reader to indulge in the text in just a couple of short sittings. While the book revolves around crime solving, the readers also follow the day-to-day activities of the protagonists, which shows how their investigative work affects their personal lives and their relationships with others. What makes this book stand out, as was the same with the previous installments in the series, is the amount of Chinese history and culture that is written into the story. Chen works a great deal of information into Lake Como about the Cultural Revolution, the Red Guards, and how Mao’s reign affected those who rebelled in China, which will enlighten many readers who do not know much on this subject.

The downside of Lake Como is that, quite often, moments are oversimplified. The whole investigation of the murders is quick in the turnaround of results, and everything falls far too simply into Ann and Fang’s laps when they become involved in the case. The dialogue and actions often read as stiff and unrealistic; many interactions between characters feel robotic and too mapped out. While likable, these characters do not have a whole lot of dimension to them, often acting in predictable manners and not breaking their molds. Information is frequently repeated, as the characters interact with one another via email throughout the book – a unique storytelling technique at the start, but after a while this method repeats enough of previous events that it becomes drab and overbearing. It would appear that many of the critiques given in Portland Book Review’s earlier review of The Fatal Sin of Love were not attended to in the creation of this installment.

While simple at times, Death Comes to Lake Como still makes for an enjoyable read, especially for those who partook in the first two books of the Back Bay Investigation series and long to learn what the characters are up to now. Any crime genre lover who is looking for a light, quick read to delve into during a lazy weekend – this may be the book for them.