The Annihilation of Nature: Human Extinction of Birds and Mammals by Gerardo Ceballos, Anne H. Ehrlich, and Paul R. Ehrlich 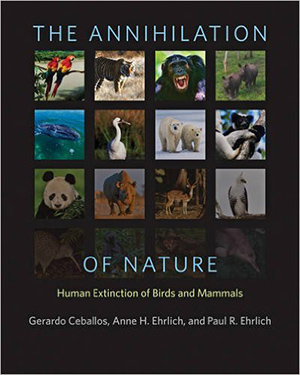 While there are many books that discuss the harm that humanity has inflicted on our planet, few go into detail into the various animals that overhunting, deforestation, and the effects of climate change are harming now and have driven to extinction in the past. In The Annihilation of Nature, three ecologists, including Paul Ehrlich, author of the controversial 1968 book Population Bomb, argue that it is crucial to “communicate to the public and politicians the emotional side of the plight of biodiversity” in order to move for environmental change that will benefit the planet and humans. They do this by focusing on those animals most familiar, birds and mammals, complementing the text with wildlife photography.

Beginning chapters on extinctions before the evolution of humans and how humans have affected the planet set the stage, while two chapters are devoted to extinct and endangered birds, and likewise for extinct and endangered mammals. Familiar birds are described, such as passenger pigeons and the dodo, while the reader will learn about some less-familiar species like the Stephens Island wren and various birds of the Hawaiian Islands. The Tasmanian tiger and Stellar’s sea cow are two examples of mammals that humans have driven to extinction, while several species of big cats, Giant pandas, and human relatives such as Lowland gorillas and the Sumatran orangutan are discussed as animals that human action could very well remove from this planet. While the authors state at the end of their account of species past and present that their purpose “is not to leave you in the depths of despair,” I wish they would have chosen a different title for their book. If the outcome for the reader is to feel positive about taking meaningful action, then the book would probably do better with a more positive sounding title. Otherwise, it is a highly readable account of our shared presence on Earth with amazing biodiversity that should be given the chance to remain so.