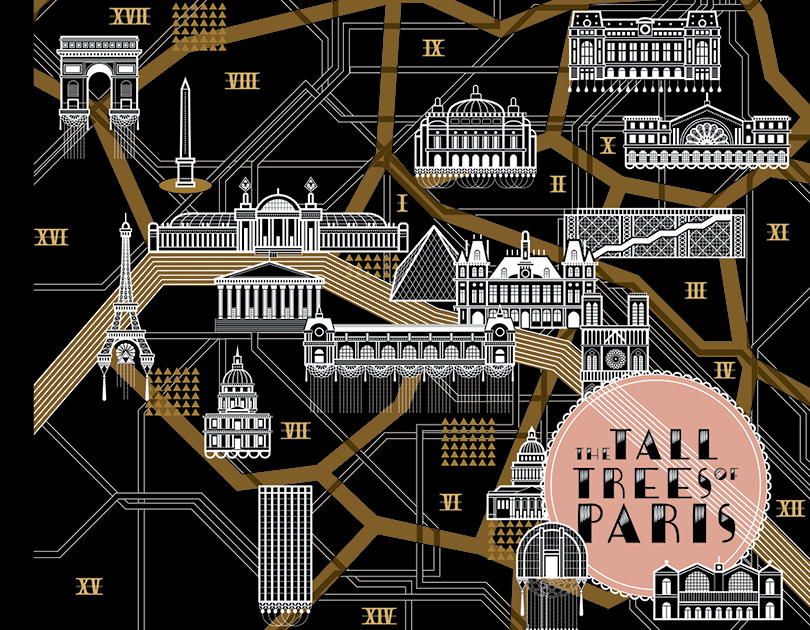 When I arrived in Paris to work on my book The Tall Trees of Paris, I was worried about whether or not I would have a difficult time meeting artists and finding interesting things to do. This worry was immediately proven unwarranted after getting a message from the artist Alexone on day one in Paris. He was making a litho print at IDEM and invited me to meet him. IDEM is the oldest litho print shop in Paris. It’s been in the Montparnasse neighborhood for 135 years.

As a newcomer to Paris, finding the entrance was a challenge. The entry is a blind passage off of Rue Montparnasse. The building is set back from the street due to Napoleon’s construction projects during his reign. Button pushed, door answered. The brightly lit entry into the old building was crammed with every size of litho stone you could imagine. Just around the corner was a large paper cutter. I couldn’t believe the size and number of presses as I passed from the entry into the main print shop. The antique glass ceiling allowed for daylight to flood the workspace making electric lights unnecessary. Massive steel shafts, cogs, and sprockets clung to the ceiling leftover form the days when coal and steam powered the refrigerator-sized motors for each press. Today’s print shop is powered by electric motors.

From across the room I saw Alex chatting with people in front of a massive press. Not the biggest press in the room but pretty damn big. We exchanged bonjours and he explained that they were making test proofs to check color and registration. The head printer on this project was a Cambodian immigrant who had worked in the shop for many years. The shop itself seemed like quite the melting pot. The assistant was Italian and soon as I came in I was introduced to a Japanese worker. Alex was working on a two color print. The first layer was printed and the print master was fine tuning the registration to prepare for the second layer.

Alex offered to show me around the print shop. The third floor was particularly amazing. The room was filled with smaller table top presses and work spaces. At one end were racks of proof prints that date back to when IDEM opened. I started thumbing through them. Picasso, Braque, Chagall, Matisse and Miro popped up like gold coins on a slot machine. I couldn’t believe I was in a print shop where these giants worked and I was able to touch those prints. As we made our way back to the main print shop we stepped out into a small courtyard where the printers take breaks to smoke and eat. The courtyard is also home to their flammable chemical storage as well as a David Lynch wheat paste left over from when the film-maker made a print at IDEM.

We arrived back at the big vintage Marinoni press just as the registration issues had been resolved. Now came the discussion of second layer color. Alex wanted orange but the print master thought it wouldn’t look good in print. He suggested another darker blue layer. He demonstrated how bad the orange would look by rubbing orange ink into a wet test proof. Alex agreed, it didn’t look good. A glob of blue ink was rubbed onto the image and that was all she wrote. Over my shoulder I saw two staff members cleaning a press. They were on top and scrubbing every inch to insure it would be ready for the next printing. The press we were on started cranking out the final two color print. As each wet print came off press, the Italian assistant put them on a table with a sheet of tissue paper in between each print to protect the image during the drying process. Within an hour Alex was sitting at a big table signing and numbering each print.

Day One in Paris set the tone for the rest of that trip. Each day contained surprises from meeting new people to exploring new parts of Paris. In the big picture I am still on Day One of getting to know the city. I truly enjoy this part – the discovery, the exploration, and the new friendships I make each day.

Matt Wagner is the founder, owner, and curator of Hellion Gallery in Portland, Oregon. Born, raised and educated in Indiana, after moving west, Wagner fell in love with Portland and learned the ropes at several galleries before opening Hellion in 2010. The Tall Trees of Paris is his third survey of international contemporary art with Overcup Press, preceded by The Tall Trees of Tokyo and The Tall Trees of Portland. Today Matt, his wife of 22 years, and their dogs live life to the fullest in the “king of mid-size cities” and enjoy breaking down barriers through art.

The Tall Trees of Paris will be available through all major book wholesalers. For more information visit www.overcupbooks.com.