The Soul Fallacy: What Science Shows We Gain from Letting Go of Our Soul Beliefs by Julien Musolino 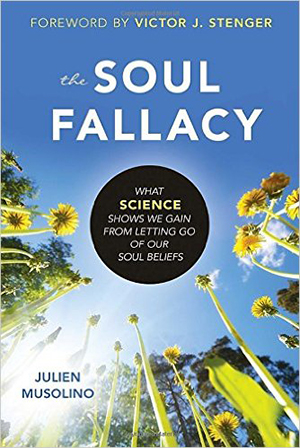 What happens when we die? Do we “Spread our wings and take to the sky?” or is it ashes to ashes? Most of humanity has long thought it’s the wings thing, but most of humanity has been wrong before. So which is it? As you might surmise, the author opts for the latter.

Mr. Musolino says that the idea of an immortal soul is a scientific hypothesis as well as a religious claim and, as such, is subject to the requirements of evidence to prove or disprove. Secondly, that soul deprivation need not lead to despair and nihilism, but can be a satisfying and liberating take on life.

The debate is between dualism, which holds that the body and the “I” consciousness are two parts: one mortal and the other immortal. Materialism, on the other hand, holds that the concept of consciousness, or mind, is just an abstract description of the physical working of the brain and does not survive brain death.

Until fairly recently, scientists did not have the tools to investigate some of the strange goings on when disease or injury changed the workings of the mind. Now, the science of neurobiology, with new equipment, is able to image in real time how the brain is acting to produce abnormal behaviors as well as research how it produces normal activity, from emotions to twitches. This allows scientists to close the evidentiary gaps that dualists have filled with supernatural explanations.

Musolino has given us a complete overview of the soul debate. The first part sets out the history of the soul concept from the ancient Greeks to the New Age proponents such as Dinesh D’Sousa and religious figures such as Rick Warren, the pastor of a California Megachurch. The middle sets out the research and advances in technology that give answers to fill in the aforementioned gaps in knowledge, and the last part proposes to show that letting go of the soul is not scary, but can be liberating.

I know, as an atheist, that satisfaction with life and the desire to be moral and ethical (or at least stay out of jail) is not damaged. That should allay many fears of the effects on society that a soulless state engenders in popular culture. For the dead, if there’s no paradise, there’s no fire either; not a bad trade.

This is a good book by a serious author. It is, as they say accessible and an easy read without being simple. Whether you are convinced or not, you will be informed.