Mischief at Midnight by Esme Kerr 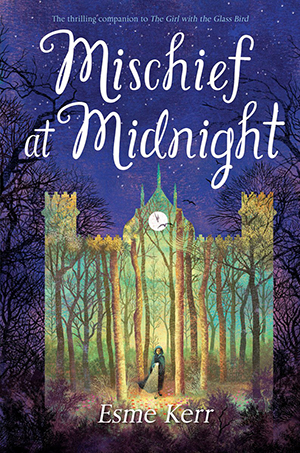 Edie is a young schoolgirl escaping a difficult home life at the cozy yet strict boarding school, Knight’s Haddon. Her best friend, Anastasia, is a genuine Russian princess, and in the previous book in this series, The Glass Bird Girl, Edie helped save her from peril. But now the headmistress, Ms. Fotheringay, has placed Edie in a different dorm from Anastasia, so that she can help the troubled new girl, Janet, stay on the straight and narrow. Then, to top it off, Anastasia has a zany scheme to sneak away from school to a fair, but her plans go awry, and she starts blaming Edie for it and turning other girls against her. But something bigger is going on just outside the bounds of the school, and Edie’s directive to help Janet might get her into even more trouble, as Janet joins a band of environmentalist protesters.

You can ask for no better escapist setting than Knight’s Haddon, an English boarding school housed in a castle in the middle of picturesque woods. The book is set in modern times, but it feels timeless, in part due to Knight’s Haddon’s strict rules about no cell phone use or technology access for the girls while at school. These are girls with modern sensibilities, but in a charmingly analog world, which is great fun to drop into as an escape from our own. A bit stereotypical at times? Sure: an old English castle where high tea is served daily, frequent rich kid vs. poor kid tropes, a typical spacey and weirdly-dressed art teacher, and hippie protesters with names like Panda Lily Rising Flower. But other characters, like the enigmatic Janet and our long-suffering protagonist Edie, are characterized deeper and are morally complex.

Since this is a sequel to The Glass Bird Girl, it helps to have read that one first. In fact, the first few chapters in this book spoil the first book, although they also give some helpful background on Edie and the series. The Glass Bird Girl explains some of the key issues of this book, such as Edie’s family situation, her mentorship with Ms. Fotheringay, how she came to be at Knight’s Haddon, and her friendship with Anastasia.

This latter part is possibly the most problematic aspect of the book, as Anastasia in this book is, well, really a mean-spirited brat. As you read, you may wonder what Edie saw in her at all, and Anastasia’s redeeming qualities don’t start showing up until halfway through the book. She drags her friends along on a dangerous adventure and then makes them take the fall for it when the school authorities find out. She cruelly bullies Edie for what amounts to a misunderstanding, and she turns the other girls against her and makes Edie’s term at school miserable. Then, after coming to her senses later on, Edie seems to take her back as a friend with no consequences.

Edie’s friendship with Janet is at least a little more fun for her, and is a good example of how, quite often, shy “good kids” latch on to the bolder “bad kids,” go for a wild ride, but end up tarnishing their own reputations for it. Janet has a dark side too, but also a vulnerable side, and in a gripping moment towards the end of the book that vulnerability is revealed.

Although the first half of the book is a bit slow – full of teenage girl drama and meanness – it quickly picks up after that. In the second half, Edie’s very future hangs in the balance, and eventually, a classmate’s life does too. She leaves the school grounds to mingle in the nearby village, glimpses some real world problems, and uncovers secrets. If only more of this excitement had been woven into the first half of the book, and less schoolgirl sniping.

If you’re looking for a light, cozy, atmospheric book to escape into for a time, this book (and maybe its prequel first) is one you will want to pick up. In spite of its character and pacing issues, it has heart, and you will find yourself hoping fiercely for Edie’s success – and maybe for her to develop some better friendships.