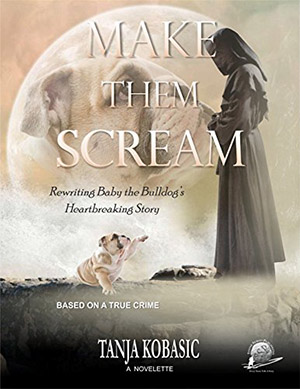 Make Them Scream: Rewriting Baby the Bulldog’s Heartbreaking Story, by Tanja Kobasic, takes a real life event and gives it a dark, supernatural spin. Kobasic writes the tale of Dougal and Amos Foulsom, a pair of brothers recognized wherever they go from the leaked footage of them attacking their family’s bulldog puppy, Baby. After moving several times to avoid being noticed and turning tricks to afford their drug addiction, the two come across Ariel, a wealthy, cloaked benefactor who takes a great interest in them. When Ariel gives Dougal and Amos an irresistible offer – a chance to start over and live out their dream professions – the brothers do not hesitate to accept. It soon becomes evident that change cannot hide the blackness in the hearts of those most evil, and for that they must pay the price.

Look, let’s be honest, if the plot description is completely ignored by any reader before delving into the text, this novelette is going to be quite a surprise. It truly is a case of “don’t judge a book by its cover.” The cover of Make Them Scream is, in every way, completely hokey. It’s an image of a bulldog puppy staring up at a hooded figure, with the bulldog’s face also superimposed on a moon above them. This book does not exactly scream “take me seriously.” This might make the reader anticipate some corny, religious story that’s about to unfold (especially due to the image at the end of the text, of the bulldog lying with a fawn in the grass), but they’ll be shocked when that’s not in the least bit what Kobasic presents.

For those unaware of the news story from early 2016, Kobasic is basing her short story off the real life incident of Andrew and Daniel Frankish throwing their family’s pet bulldog down a flight of stairs, as well as torturing it in the process. Much like in the story, the young men did not face any jail time for their crime. While unable to do anything about it herself, Kobasic takes matters into her own hands by penning a different sort of end for the boys who inhumanly attacked an innocent dog.

Make Them Scream is dark and surprisingly well written. There are many descriptions of sex, drug usage, animal cruelty, and human mutilation – just a heads up for anyone with a weak stomach. The descriptions are powerful and precise; Kobasic doesn’t dawdle on lengthy paragraphs and gets straight to the point, while still having room to paint a full picture of each scene and setting. The intrigue of this novelette – and it really is short, only fifty-six pages in length – is intense. Readers will urgently want to find out who Ariel is, the hooded figure’s cryptic purpose, and if the Foulsom brothers will get their just rewards. Most intriguing of all, the point of view of the novel comes from the brothers’ pet snake. This is totally unnecessary in some ways, but makes the read all the more enticing. Kobasic could have just simply narrated the novel in the third person, or had one of the brothers or Ariel supply the point of view. An animal, though seemingly random at the start of the story, ends up being the perfect narrator, while also setting this story apart from plenty others.

There are faults in the story, to be sure. There are some small grammatical errors and typos every now and again, some plot points that could have been expanded upon, and that book cover should probably be a little less misleading. Those points aside, Kobasic has crafted a story that is harrowing, intriguing, and well written. Perhaps a bit more cruel of a fate for those who torture animals than some would wish, but at the same time readers of Make Them Scream will find themselves satisfied with the way it all comes to a close.